Māori leaders are alarmed that armed police squads set up to tackle serious crime will also deal with low-level offending. 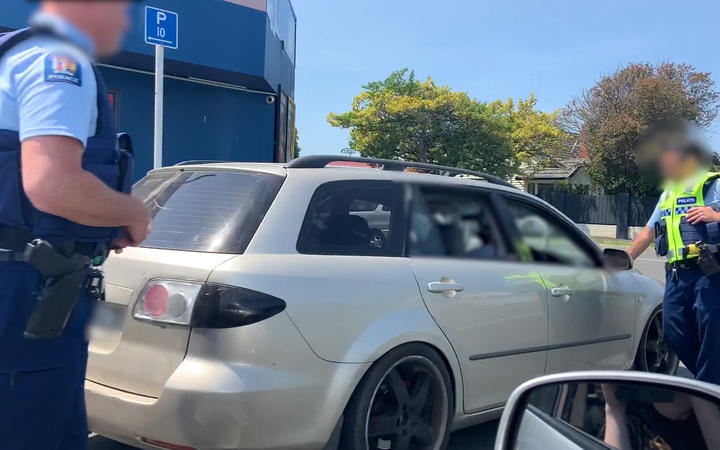 A still taken from video footage of a police Armed Response Team unit pulling over a car on a Hamilton road. Photo: Supplied / Bianca Brown

They say it was overkill that armed officers in Hamilton at the weekend stopped a car being sought for dishonesty offences and arrested a man for breaching conditions.

A bystander was so disturbed to see police officers - at least one wearing a glock pistol - arresting a man on a suburban road at the weekend that she filmed it.

Police said their actions were appropriate because there was a warrant for the man's arrest, and he had previously had guns on him.

Auckland University of Technology associate professor Khylee Quince said it was over the top.

"So based on the details that we have of this apprehension so far this very much seems like a sledgehammer to crack a nut," she said.

"This is overkill in respect of use of armed officers to arrest or apprehend someone for very low level offending that ordinary policing should have been able to deal with."

The man was arrested without incident for "breaching conditions". He was not charged with any gun offences in this case.

Police would not confirm if the man was Māori but the woman who filmed the video said he was brown.

Many Māori have raised concerns that armed police will result in more Māori being shot.

Police initially said the Armed Response Teams would focus on firearm and weapon related call-outs, but now they say the teams will deal with whatever they come across, and carry out preventative patrolling in high risk crime spots.

"At this stage, this seems to justify the concerns that we have talked about in the last couple of weeks," Ms Quince said.

"That this is really about social control of particular populations being Māori, Pasifika, marginalised people.

"What are labelled and characterised as high-crime areas which are just areas where, really, brown poor people live."

He was even more concerned now that their remit seemed to have expanded beyond firearm and weapon related call-outs.

"I didn't expect it to be expanded quite so quickly, and it is clearly an expanded risk to Māori," he said.

"Rather like the expanded use of tasers - after an initial limited release, resulted in more Māori being tasered for example."

Less than a week ago, police launched a new strategy aiming to reduce Māori reoffending by 25 percent by 2025.

Mr Jackson said they were going about it the wrong way.

"Promoting greater community engagement and then behaving in a biased or unnecessarily aggressive way to Māori don't go together."

Former officer Hurimoana Dennis said there was a lot of positive kōrero in the new strategy, but he still questioned how invested the police were in making it work.

"The difficulty I think is, and it has been an ongoing issue, is how committed the police are to actually resourcing and getting the liason networks and the external networks moving in the same direction," he said.

Mr Dennis said there were instances where police should have access to guns for protection and would not be drawn on the appropriateness of an armed officer dealing with the weekend's incident.

Ultimately, there would be no need armed officers if police's past prevention strategies had worked in the first place, he said.