Dozens of South Auckland residents have railed against the "Americanisation" of New Zealand's police force, fearing the number and scope of armed groups of police officers will slowly expand until it becomes normal. 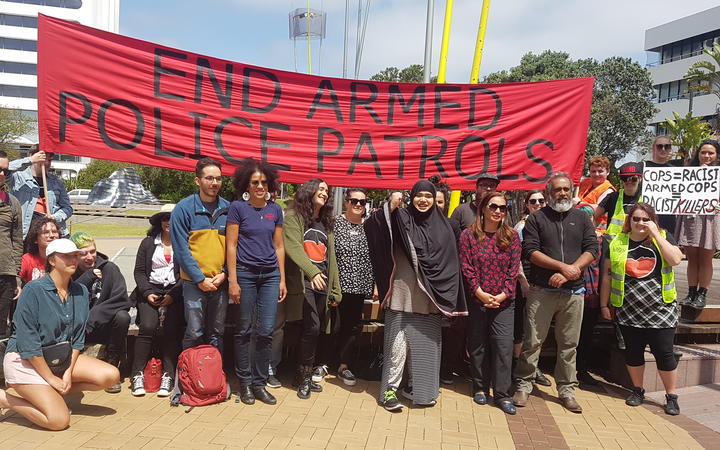 Police announced members of the Armed Offenders Squad would be stationed in Counties Manukau, Waikato and Canterbury as Armed Response Teams, in a six-month trial to reduce response times to gun incidents.

About 60 protesters gathered in Manukau Square in South Auckland yesterday afternoon. Speakers at the event said the plan was dangerous, and having more armed officers will exacerbate negative outcomes for Māori, Pasifika and migrant communities.

"This is absolutely a step towards the militarisation of the police in this country," said Emilie Rākete, a founder of People Against Prisons Aotearoa.

"When we look at similar armed police patrols in other countries, we see that there is a 'creep' in how they're used - from just being an emergency response to be used in some circumstances, to being used to execute routine search warrants. When that happens, we see a massive escalation in how many people are killed by the police in other countries," she said.

Ms Rākete said it was also undemocratic and the decision to "fundamentally" change policing in this country was made without anyone voting for the measure.

"The evidence is clear: armed police patrols mean people being killed by the police, and that will mean Māori people in this country."

One of the speakers, Julia Whaipooti, said many people did not see the police as a beacon of safety, and that having more police around will make them feel less safe.

"Stop the militarisation of the police," she later tweeted. "Eight times more likely to use a taser on Māori. Who will they use their guns on?"

The protesters also said it was unnecessary, as the number of gun crimes had been falling over the past six years. 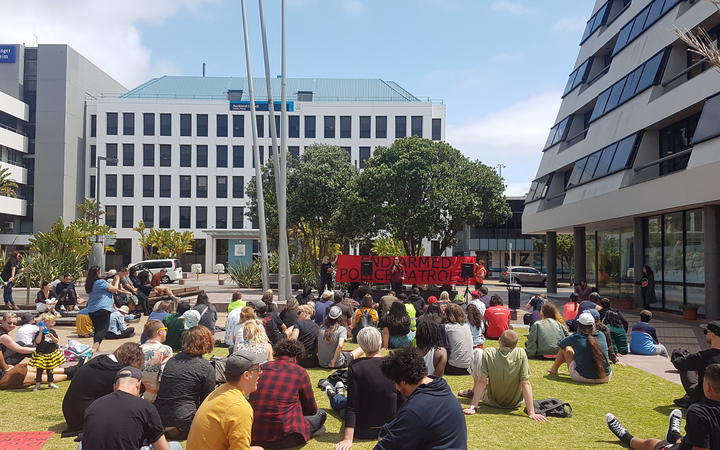 Green Party co-leader Marama Davidson spoke at the protest in opposition to the police plan - not only raising concerns as a politician, but as a mother.

"I have an absolute responsibility to raise a very logical concern," she said.

She's raised that with Police Minister Stuart Nash, and while noting that the police have operational independence, has asked to have a meeting with Mr Nash so that she can be assured that people will be kept safe.

"There is absolutely no guarantee that in the heat of the moment... you know - we've actually seen that when there is a misunderstanding of an incident, other innocent people can be pulled into harms way in that instance, so no I am not comfortable.

"The evidence is very clear: arming police has never led to less violence, even for police. So it's very logical for people to have these concerns, and I am raising this also."

Speakers were also frustrated that the Police Commissioner used the Christchurch mosque attacks on Muslim worshippers as part of the rationale to put more police in South Auckland.

Police said it was an issue of the safety of the public and officers. They said in the past six months, firearms were seized and surrendered in 40 percent of firearm callouts - about 1200 guns.

"Police is aware that some people may have concerns about the deployment of Armed Response Teams. Our people do an amazing job in keeping our communities safe however, we must recognise that the environment has changed and Police's capability and resourcing needs to reflect this," Deputy Commissioner John Tims said.

The Armed Response Teams will be made up of members of the Armed Offenders Squad, ready to travel to incidents with "significant risk" more quickly. They will carry glock pistols and tasers, and rifles will be in locked boxes in the vehicles.

"The benefit of utilising the Armed Response Teams is that they will be staffed by existing trained and experienced specialist AOS personnel who know how to deescalate situations. They will provide ongoing reassurance and guidance to our frontline staff on how to manage incidents involving firearms," Mr Tims said.

The three areas in the six-month trial - South Auckland, Waikato, and Canterbury - have had some of the highest numbers of firearms seized and surrendered. At the end of the six months an evaluation will be made whether to continue and expand the trial.

Mr Nash said the decision did not mean the police were moving to routine frontline arming.

But Ms Rākete said police wanted to push it through and say they were the ones who were in charge.

"But we are the ones who have real power... We're going to stay on this kaupapa.

"I hope that I never, ever have to look on the news in the morning and see that these armed police patrols have shot a brown kid to death. We can stop that from happening, but the only way we can do that is if we all fight together."