Occupiers of the disputed land at Ihumātao have been shut out of talks with the government about finding a resolution, saying they haven't had any direct contact with ministers in more than a month. 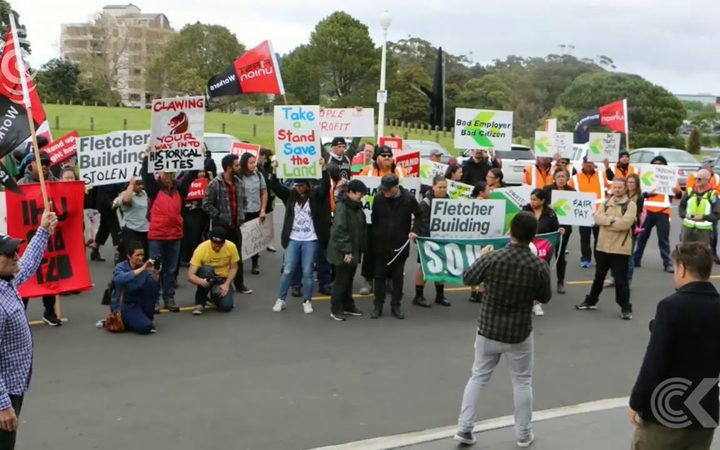 The Māori King announced in September mana whenua had reached a consensus that they want the land returned, and urged the government to negotiate with the owner of the land, Fletcher Building.

But 86 days since the mass occupation at the South Auckland site began, mana whenua say they've been left in the dark, and are not any closer to finding a resolution.

In that time there have been hour-long stand-offs between occupiers and officers on the front-line, a hīkoi to the Prime Minister's electorate office, and protests inside Auckland Council offices.

But Qiane Matata-Sipu, a member of protest group SOUL, said since mana whenua announced their unified position, they hadn't heard from the government since.

"We haven't had any direct contact from anyone within the government, or from any higher-level representatives of Fletchers," she said.

"One of the things I do know, or have heard, is that the government has listened to the King's advice and has begun having conversations with Fletchers, but we're really not sure where those conversations are at and are a little bit disappointed that they're not happening fast enough."

She said the delay wasn't good enough, and suspected it had something to do with the government treading carefully before the next election.

"Let's be real here, I think what the government needs to be looking at is doing the right thing, not doing the thing that is going to win them the most amount of votes."

Finance Minister Grant Robertson met with Fletcher Building last month to discuss options moving forward, but won't say what was said, or give a timeframe of when a decision might be made.

"The Government's focus is on supporting a resolution that respects all the parties involved," he said in a statement.

"As we go through this process we are mindful of open heritage claims, the importance of not re-opening Treaty settlements and commercial interests in the site."

The Minister of Māori Crown Relations, Kelvin Davis, was keeping tight-lipped too. When asked if he had an update on Ihumātao, he told RNZ to ask the Prime Minister.

"That's not an issue that I'm responsible for, you'll have to ask PMO,"

Fletcher Building also declined to be interviewed, saying in an email there was no update.

The only person who did want to talk about Ihumātao was National Leader, Simon Bridges.

"I think we've got the worst of a bad situation. We're 80 days in and nothing is happening, and I think that's because the Prime Minister, having stuck her oar in, now isn't sure what to do.

In the meantime mana whenua remain optimistic about the prospect of having the land, once stolen from their ancestors by the Crown, returned.