Questions still surround the origin of an historic kakahu or cloak found in a house in England and believed to have belonged to Rewi Maniapoto. 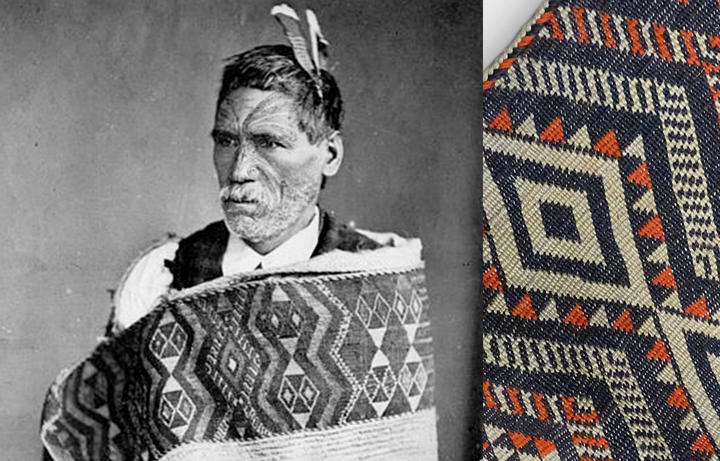 The Maniapoto Māori Trust Board questions the authenticity of the kakahu. Photo: Supplied / Burstow & Hewett - Auctioneers

The kakahu was found in a couple's cupboard in England but plans to auction it have been called off after online threats and abuse.

The Maniapoto Māori Trust Board said it does not condone any sort of threats and although it can understand the passion on the kaupapa from some people, encourages them to be calm in their approach.

Trust chair R Tiwha Bell said once it was made aware of the kaitaka styled cloak, it spoke with people holding knowledge on the kaupapa.

"We concluded that there was just not enough evidence to establish the provenance of the cloak in terms of its association with Rewi Maniapoto."

Mr Bell said the only evidence is a note attached to the cloak, claiming it was worn by the chief when peace was declared after the battle of Ōrākau.

However he questions the historical accuracy of the statement.

"Peace was not made after the Battle of Ōrākau. Rewi and the other survivors escaped and retreated across the Pūniu River into Maniapoto territory where they set up an aukati - a line that was not to be crossed by Europeans."

He said it wasn't until 20 years later that the aukati was lifted and a peace negotiated. 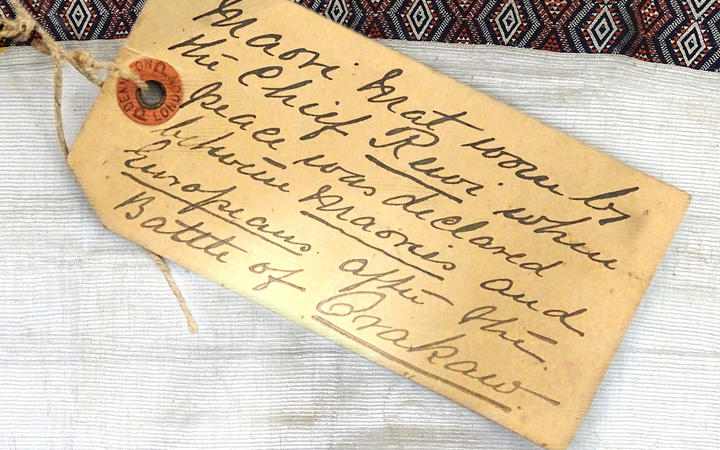 The only evidence is a note attached to the cloak, claiming it was worn by the chief when peace was declared after the battle of Ōrākau. Photo: Supplied / Burstow & Hewett - Auctioneers

Prominent historian, Dr Tom Roa, said the battle at Ōrākau was romanticised by colonial writers as a heroic but futile stand by Rewi Maniapoto and his followers.

"Rewi Maniapoto and the Battle of Ōrākau were retold in stories, poems and even a movie, and while Maniapoto celebrate him as one of their most important 19th century leaders, Pākehā also developed a fascination with this great Māori hero.

"I'm sure it would have been pretty popular to have something purported to belong to Rewi. Whether it was authentic or not is another matter."

Dr Roa believes more investigation needs to be undertaken to establish the provenance of the cloak noting the tribe has some leading experts in the art of weaving such garments.

The Maniapoto Māori Trust Board deputy chair, Keith Ikin, said it is still seeking further information - and wants to speak to the family who has it.

"We've got questions because the information provided has significant historical inaccuracies, that is why we are questioning the authenticity of the kakahu but we want to have the conversation with the family and ascertain whether or not it has provenance."

It said that the present owners inherited the kakahu some years ago, when their father, a vicar, died and left them his entire house and contents, and this was discovered hidden away in an old linen cupboard. They have now traced their family tree back to a Thomas Grice, who was recorded as spending time with Chief Rewi in the years after the Māori wars, which were between 1845 and 1872.

The Auctioneer said that the kakahu has been kept folded in a dark cupboard for around 100 years, it has retained its brightly coloured border, and is in almost new condition.

Burstow and Hewett have been approached for comment by RNZ.