Kiingi Tūheitia says he is encouraged by the progress between opposing mana whenua at Ihumātao. 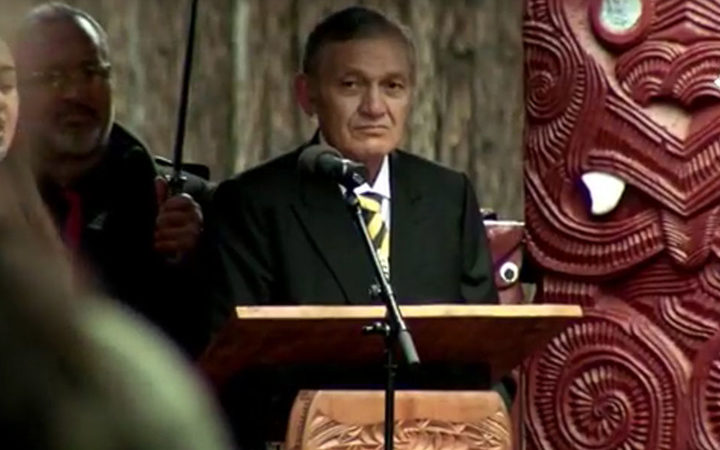 In his annual address at Tūrangawaewae marae on the 13th anniversary of his coronation he spoke about the relevance of the Kiingitanga today and how it must adapt while staying true to the founding principles of the movement.

"For more than a century-and-a-half the Kiingitanga has been a symbol of unity and peaceful resistance, a beacon of hope in time of despair - a rallying call for our people. That is true today as it was 160 years ago. Like our people - the Kiingitanga has endured but it must also adapt to our changing times.

"In my view, the relevance of the Kiingitanga will be determined by what it does as much as what it symbolises."

Kiingi Tūheitia Pōtatau Te Wherowhero VII said that this was the reason he, along with a contingent of more than 400, visited Ihumātao just over two weeks ago, offering to facilitate resolution kōrero with opposing mana whenua.

"Much is yet to be done but I am encouraged by the kaupapa to date, the progress is ongoing, it will take time. Under my korowai and protection the mana whenua can talk freely. They have waited 150 years for their confiscated whenua, they deserve time and space to consider the future of their ancestral land."

Fletcher Building, who had been quiet on the issue, said today that they felt it was the right and respectful thing to do to halt works at the site while a resolution was reached.

Its chief executive Ross Taylor said the protest hadn't had an impact on the business and they were staying out of resolution talks between the Kingiitanga and mana whenua.

"We need to not make comments from my perspective, and just to give clear air for everybody to work through what is a very complex issue and so I'm not going to comment on that for that reason," he said.

"We've been very deliberate about that for the last four weeks and we'll continue to be - I just don't want my commentary or Fletcher commentary contaminating that process."

Kiingi Tūheitia also addressed the outrage among Māori of Oranga Tamariki, but he put a wero down to Māori to ensure they looked after and protected tamariki.

"My challenge is to the whānau, hapū, iwi to take care of our tamariki and where the need arises to place them in a safe home. We must avoid blaming the government and instead work on a solution. We have a chance to design a solution on our own."

He was met with laughs when he talked about Prime Minister Jacinda Ardern's visit and her invitation to be held to account.

Kiingi Tūheitia talked about a range of projects and visits in the past year, including visiting the Pope and his renewed commitment to look after those fallen on hard times. He said he had invited the Pope to Aotearoa, which seemed to have been taken seriously.

He said the Kiingitanga had been working alongside Department of Corrections and Housing New Zealand on building a new facility on Te Wherowhero land at Collins Road, after he visited the Wiri women's prison and felt strongly that despite being in houses on the grounds that inside wired fences was "a wrong way for a child to start their life". He said progress had been slow but he remained hopeful.

He has also charged Waikato-Tainui entities and the government to take on the legacy project to ensure the protection and preservation of cultural history - including the Kiingitanga taonga collection, which catalogues and charts their journey over the past 160 years.

"The collection is stored across a number of sites, there is no consistent strategy to care for and provide the appropriate display of items from the collection. It is vital that we continue to record, gather and protect these items and preserve these taonga in purpose-built facilities."

He said it was integral to do this so the history was shared and valued to prevent a repeat of mistakes made in this country.

Kiingi Tūheitia finished his kōrero, in ad-lib fashion, advising leaders around the country about to do their mahi.

"All these leaders, they can't just use their head, you've got to use your heart. You're there for the people."