Pressure is building to review an Aviation Security policy on Māori taonga not being allowed to be taken onto planes. 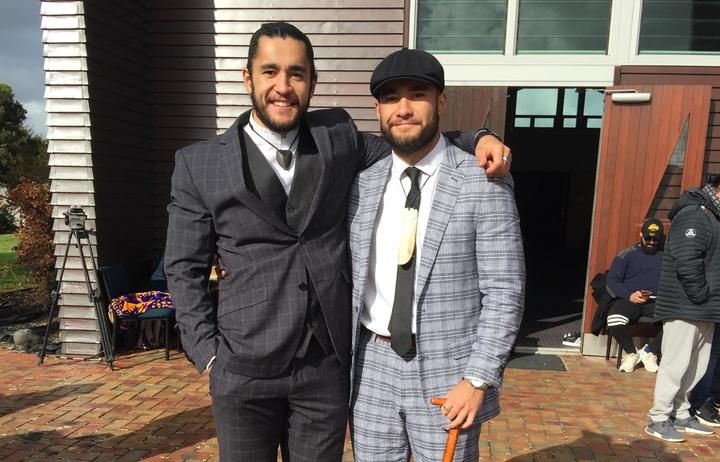 It comes after two tāne have shared their stories about being stopped because of concerns their carved walking stick or tiripou could be used as weapons.

Tipene Kapa-Kingi and his brother were returning to Wellington from Auckland in the weekend after also graduating from one of the most exclusive and top Māori language courses, Te Panekiretanga o te reo Māori.

Both of them were carrying tiripou - one had whakairo, the other did not.

They were stopped at security and told the carved one couldn't go through.

"Same stick the only real difference was his one had carvings on it so suddenly they had this perception that it could be used as a weapon to hurt anyone. When, really, you could use any walking stick of any sort to hurt anyone if you really wanted to.

"They were struggling to come up with a legitimate reason. They were saying that because the shape was slightly different - it didn't have a traditional walking stick handle on it - they were saying all sorts of things like it was a little bit heavier than my one and could be used to attack someone or abuse someone." he said.

Mr Kapa-Kingi and his brother, after much discussion with security, were eventually let on board with both tiripou.

He said he was perplexed by not only the discriminatory and what he calls racially motivated policy but that it was inconsistently implemented because they were let through Wellington airport with no problems.

He is calling on Aviation Security Services to change their policies.

"A major takeaway from the situation is that the policies need to be revisited and there needs to be a consistent, unbiased interpretation of those policies. So in Wellington there was no issue but in Auckland there was.

"When they were showing us through the rules and the policies there wasn't any consideration around taonga Māori, taiaha, patu, mere, tiripou, all of those sorts of treasures that we hold in te ao Māori."

Taonga should be kept on you

He said he had similar issues with a pūtōrino, who is nicknamed Humphery, which is a traditional Māori instrument.

Mr Gloyne said the fact that the men were younger and didn't need tiripou for mobility may have been part of why they were stopped by security.

But he said it was a wider discussion and the point was that a taonga, such as a tiripou, should be kept on you.

"We have a connection, it's another part of you, when these particular tiripou are used in the oratorical art of Māori whaikōrero and they are a part of us, they are an extension of ourselves, hence we want to keep them with ourselves, on person."

He said Aviation Security Services needed to get appropriate guidance and revisit the policy.

"They should review their policy and the people that review the policy they need to have people on there that can give a Māori worldview, so it shouldn't just be reviewed by the civil aviation, they need some sound advice on it."

Tipene Kapa-Kingi said it was integral these taonga stayed close as well.

"These sorts of taonga should not be just thrown into luggage, it is important to keep them close to you when you are travelling so you have peace of mind that they are safe and they are with you and no damage will be brought on to them.

"It's really important these sorts of taonga should be allowed as carry on luggage and permitted to be carried on by whoever has them."

In a statement, Aviation Security Services, said it is important that their procedures are consistent across the airports.

"Our officers are specifically required to remove 'blunt instruments capable of being used to cause serious injury when used to hit'. This policy covers a wide range of items, including baseball, softball, and cricket bats, golf clubs, didgeridoos.

"Although a tiripou is not a weapon, just as a baseball bat or set of golf clubs are not weapons, they could nonetheless be used as a weapon by a malicious passenger, who may not even be the passenger who took the item onboard."

It says it will be internally reviewing the matter to ensure its current policies are consistently applied, whether a passenger is flying from Tāmaki Makaurau or Te Whanga-nui-a-Tara.