A 160-year-old flag, from the time of the first Māori King, Pōtatau Te Wherowhero, has been returned to the Kīngitanga by the Anglican Church. 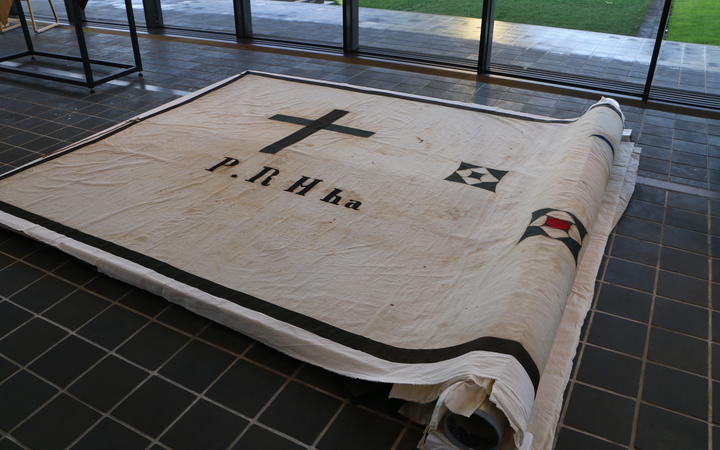 The 160-year-old Kīngitanga flag has been returned by the Anglican Church. Photo: RNZ / Eden More

The Anglican Diocese officially signed over ownership to the Kīngitanga yesterday, after forgetting they had it for 90 years.

Members of the Kīngitanga travelled north from Ngāruawāhia and joined representatives from the Anglican Diocese of Auckland and Te Pihopatanga o Te Tai Tokerau in the cathedral.

Pōtatau Te Wherowhero was the first Māori King, crowned in 1858.

"Symbols of his prestigious office were created as the Kīngitanga grew and became the illustrious institution it is today. The Pōtatau flag was one of those symbols; designed to reflect the mana and tapu of this sacred office," he told those gathered at the church.

The origin of the flag is unclear, it may have been made as a kind of funeral pall at the time of Pōtatau's death.

In 1929, it surfaced in England. It appears to have been taken there in 1865 by a member of the clergy who had served in Aotearoa. It was then returned to Aotearoa.

Ross Bay, the Anglican Bishop of Auckland, said it is time for the taonga to finally return home.

"We have unknowingly had care for this taonga for 90 years, hidden away in the basement of the Auckland Museum and rediscovering it around the anniversary of the Kīngitanga movement. The opportunity has arisen for us to ensure that it is returned to its proper home, which is Turangawaewae Ngāruawāhia to the Kīngitanga .

"So it's a very historic moment and the oldest artefact that the Kīngitanga will hold and belongs to the very first King Pōtatau Te Wherowhero. So it seems important for us that it is back in its home."

The Bishop said the timing of the return is providential - it's a week before the Koroneihana celebrations and almost 90 years to the day since it was placed with the Auckland Museum for safe keeping.

"I work with a lot of taonga Māori and you know they have their own way of putting their heads above, saying oi it's me, it must be time for it to go home. And I think that's the significance - to hokinga mai," she said.

Bishop Bay first saw the flag when it was displayed as part of an exhibition on the Kīngitanga held at Auckland Museum.

"I hadn't realised quite what an impressive size it is. For those who haven't seen it it's an enormous artefact. It's spectacular to see."

Museum curators spent 450 hours restoring the flag for the exhibition.

Barbara Moke said the Kīngitanga now needed to work out what to do with the taonga.

"I mean a flag this size, in a practical sense will be really difficult to fly but I would think that the first thing that needs to be done is to find it a safe house - and there are plenty of safe houses down in Waikato. And then the next thing will be how do we bring this taonga out, and how do we show this taonga to the people - it's come home for a reason."

The flag will be welcomed back to Turangawaewae marae formally next week with Waikato Tainui now re-assuming their role as kaitiaki of the taonga.