A large pou whenua (land post) has been unveiled in Kahurangi National Park. 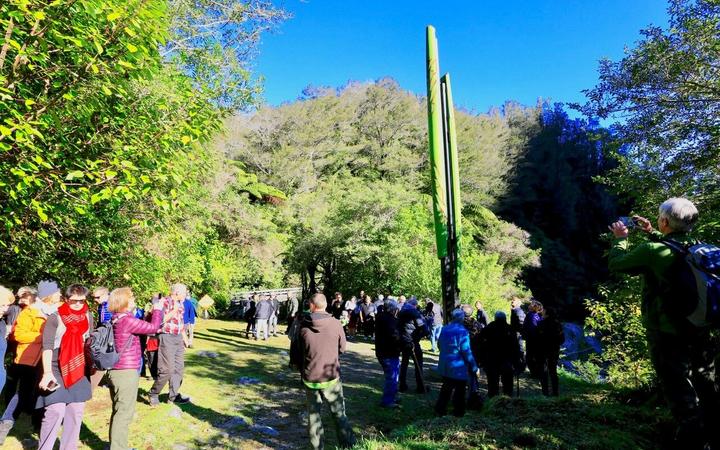 Pou whenua are used to mark territorial boundaries and areas of significance to tangata whenua.

The site was blessing at a ceremony attended by the Minister of Conservation Eugenie Sage and representatives of Te Rūnanga o Ngāti Waewae, the Department of Conservation (DOC), regional and district councils and local conservation boards.

Ms Sage announced the review of the Kahurangi National Park Management Plan, which follows the addition of 64,400 hectares of land to Kahurangi from the Mokihinui River catchment area.

Te Rūnanga o Ngāi Tahu kaiwhakahaere (administrator) Lisa Tumahai said the addition was significant to the iwi, and especially to her rūnanga of Ngāti Waewae.

"Pou whenua have always been important to our people. They establish a footprint and provide a tangible sense of Ngāi Tahu mana in our takiwā. Ngāi Tahu are the kaitiaki or guardians of this land; we must ensure it is protected for us, and our children after us."

The pou is the first of several that will be installed in the Ngāti Waewae takiwā.

"Ngāi Tahu is commencing a new strategic phase to take us through to 2050," Ms Tumahai said.

"A key part of that strategy is Haea Te Awa, a new vision and direction, which places regional rangatiratanga at its heart. Part of this is a takiwā wide pou whenua initiative."

Ngāti Waewae chair Francois Tumahai said the review of the park was welcomed.

"The pou itself represents recognition that partnership is the way forward in terms of our relationship with The Crown and the ongoing work we're doing together."

Carver Mahana Coulston said he felt lucky to be have worked on the pou.

"The pou represents the only iwi in the region of Mōkihinui, being Ngāti Waewae. It speaks of the whenua from our rangatira Tarapuhi to his cousin Mata Nohi Nohi, who was Ngāi Tahu."