In a small town in rural Wairarapa a kapa haka group has brought a community together. 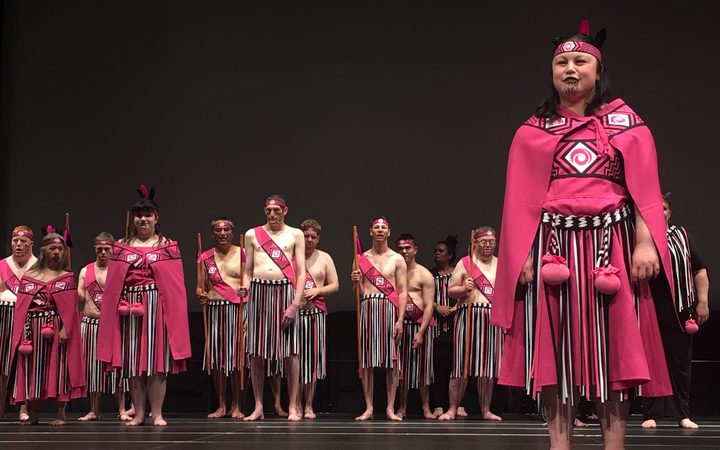 Te Roopu Manaaki is today performing at the inaugural national kapa haka festival in Hamilton for people with intellectual disabilities.

Last week, they invited the township of Carterton to watch their final dress rehearsal to prepare for it, and to their delighted surprise a town hall packed full of people went along to cheer them on.

Draped in bright pink kākahu and stained with facial moko, members of Te Roopu Manaaki stepped out on stage with their heads held high.

It was a special moment for performer Faith Konia.

"When I looked at the crowd it was awesome to have them, you know, the full Wairarapa support of Carterton and also Masterton.

"I was trying to look at the window up top [to concentrate]."

The group is preparing for one of the most important performances of their lives.

Fifteen teams from around the country will compete at the festival.

Tutor Tama Biddle has volunteered his time each week to get Te Roopu Manaaki ready for the national stage.

"[It takes] lots of time, we've had four hours on a Thursday. Especially with the sign language stuff which we all struggled with, even the caregivers and myself as a tutor. It just took a whole lot of patience and just had to slow our tutoring style down a lot."

The group wrote all the songs themselves.

Mr Biddle said many of the lyrics reflected the difficult challenges they faced in their lives.

"The chant that we did is to do with discrimination, people treating us with judgement and disrespect. The performers have just gained a lot of confidence in themselves, they belong somewhere now and we used the kapa haka to instill those feelings of respect for others so that it doesn't matter what people think of you at the end of the day, it's what you think of yourself."

The Carterton community has been working hard in the background volunteering, fundraising, sponsoring the group's uniforms, and organising performances at local schools.

Many of them watching and listening had tears in their eyes.

They know these performers face barriers most people take for granted.

But Ms Konia said she has learned through kapa haka she doesn't have to feel ashamed about her intellectual disability.

"The diversity of disability is out there aye. We shouldn't be in the shadows so I hope disability gets ... more out-there."

Ameria Wallace's voice is louder than anyone else's in the group.

She said kapa haka was in her blood.

"I was brought up with kapa haka when I started kohanga. I did singing at school when I was five and now that I've grown up I stand proud and stand strong with everybody that knows what kapa haka is."

She was overwhelmed with the support from her community, but said they hadn't seen the last of her yet.

"It felt right, it was so exciting. I've never performed in front of people that understand who I am and there will be more to come in the future."

The local crowd rose to their feet and kids from Carterton school performed a haka to acknowledge them one last time.

Te Roopu Manaaki will now face their biggest audience yet, and they intend to make their town proud.