A small Far North iwi says it is in the firing line for trying to develop its land, while all around it developers are digging up similar land for orchards and no-one's bothered. 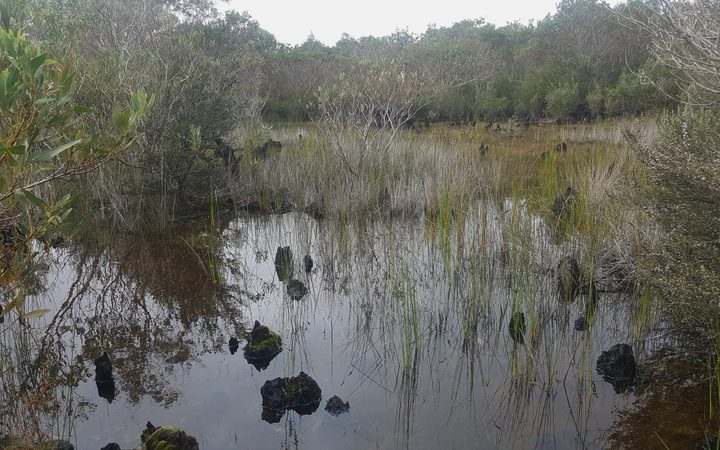 The Kaimaumau wetland that is part of the resource consent for Resin and Wax. Photo: Supplied

Department of Conservation (DOC) announced this week it would join Forest and Bird in a High Court challenge to resource consents for a peat-mining venture north of Kaimaumau.

The iwi land is part of the Kaimaumau wetland complex and DOC believes the project could damage the adjoining scientific reserve, by lowering the water table.

The landowners, Ngāi Takoto, say they're frustrated and disappointed by DOC's stance.

The iwi has partnered with an Auckland company, Resin and Wax, to dig up Ngāi Takoto land and extract valuable industrial compounds from the peat.

The process is a recently invented one, and the pilot project in Kaitaia has had funding from the government's Callaghan Innovation scheme.

"So we find it a bit strange and a bit of a waste of taxpayers' money that their real concern is not the proposal itself, but basically a disagreement with the council over the fact that they considered they were not notified of the consent, and we find that an argument that is not acceptable."

Much of the wetland was dry most of the time and was little more than a wattle and weed farm, Mr Marsden said.

It had also been well-turned over in the past by gum diggers and swamp kauri miners.

Ngāi Takoto planned to set aside the environmentally valuable parts, including a small lake, then extract the resins and waxes and restore the land to a useable standard, Mr Marsden said.

The iwi had bought their land from the Crown with their Treaty settlement, hoping it too could one day be developed, like other land on the Aupouri peninsula.

"So we have an issue about non-Māori being able to develop their land, which is right next door to where we're talking about, in any way that they want to, and iwi are saying let's develop our land but with an environmental and enhancement strategy and we're being penalised because people see us as destroyers of wetlands and swamps."

DOC northern region manager Sue Reed-Thomas said she sympathised with Ngāi Takoto's desire for economic development but DOC had a statutory duty to advocate for the environment.

"I'm not aware of what's happening next door to their land - DOC's involvement is triggered by the resource consent process," she said.

DOC had not been aware of the extent or nature of the Resin and Wax venture until it saw their application for resource consents.

It had then held discussions with the company and Ngāi Takoto, and told the Regional Council it believed the consents should be notified.

"The iwi site is part of the Kaimaumau-Motutangi wetland complex, and that is listed as a habitat of international significance in the council's own soil and water plan," she said.

"We said to them that we believed the project would have significant adverse effects on one of Northland's most significant wetlands.

"We told them we thought the consent should be notified but the council chose not to do that. So in terms of changing the resource consent that left us with the only legal option of seeking a judicial review of the council's decision," Ms Reed-Thomas said.

The Northland Environmental Protection Society, which was formed to save wetlands in the north from development and swamp kauri mining, said it was pleased that DOC was challenging the peat-mining venture.

The Ngāi Takoto land was not a weed farm, but a regenerating wetland, according to the society's president, Fiona Furrell.

"We've got drone photos of it taken from the DOC side, of the regeneration, and it's beautiful. What they are trying to destroy is beautiful."

But there was more at stake than just beauty, Ms Furrell said.

"A good deal of the area they want to dig is only 1.5 metres above sea-level, and they've got permission to dig down to eight metres."

The risk of saline incursion was huge, she said.

"It's full of extremely rare orchids, fernbirds, geckos, regenerating mānuka and it has been completely unsurveyed for very precious indigenous plants."

Mr Marsden said the Crown sold Ngāi Takoto the land - and if it was now going to stand in the way of iwi development, the Conservation Minister should at least pay a visit and see for herself what's at stake.

"I don't think she's been properly informed about the nature of the Resin and Wax project, and the gradual way it will happen, so we can protect and restore the land as we go," he said.