An unwanted walking track has been carved into a sacred pā site on a South Auckland maunga. 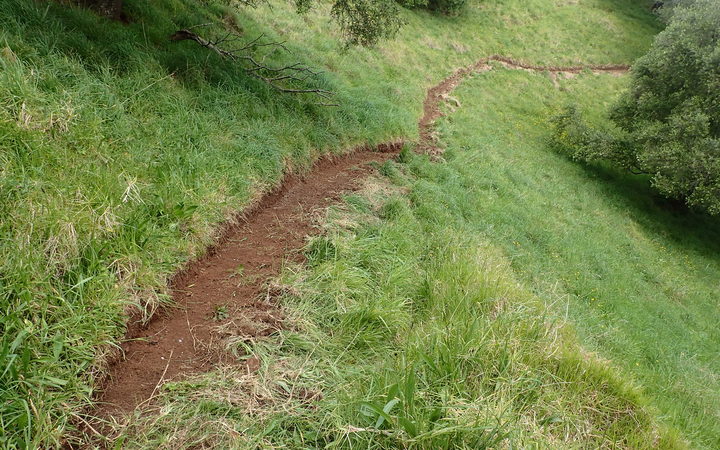 The 20 metre-long path now runs through the Ōtāhuhu hillside and two feijoa trees have been planted in the area.

The Tūpuna Maunga Authority, which co-governs 14 mountains in Auckland, was told of the damage last week.

Its operations manager, Nick Turoa, said the area is sacred, and once belonged to a fortified Māori village or pā.

"Ōtāhuhu belongs to a network of maunga around Tāmaki Makaurau. All of the maunga are spiritually significant as sites where Māori have occupied for a thousand years.

"They represent where people have lived, they're wāhi tapu in the sense that people are buried at those sites, they are old ancient pā sites and undoubtedly there would have been tribal war fare at certain times on the maunga."

The authority was alerted to the damage last week.

"Unfortunately there's no real idea of who may have done this.

"But the site is archaeologically significant and unfortunately we don't have very many remnants of those sites anymore in the metropolis of Auckland."

He said the damage was a prosecutable offence under the Reserves Act 1977 and the Heritage New Zealand Pouhere Taonga Act 2014.

Damage like it had not been seen on any of the other maunga governed by the authority, he said.

But he urges people to look after them.

"We would just like to raise awareness of people around these sites. They aren't places where we're encouraging people to go and dig into, that is essentially an offence.

"But, more importantly, they are wāhi tapu and they are culturally significant and we as Aucklanders and as New Zealanders, should be working together to protect these sites."