Protesters have left former Catholic school Hato Petera after an order from the High Court. 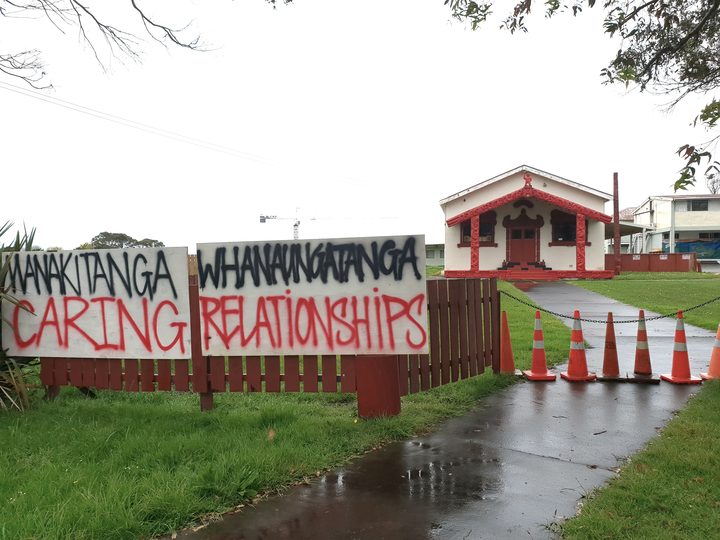 These signs are all that remain of the protesters at Hato Petera. Photo: RNZ

The group had occupied the Auckland school since it closed in August but on Tuesday they were told to move on.

Originally belonging to Ngāti Pāoa, the land was purchased by Governor George Grey and subsequently granted to the Roman Catholic Church in 1850 for education.

Ngāti Pāoa contends an earlier agreement with the Crown was to set aside the land specifically for educating Maori and are also including the ownership of the land in a Treaty of Waitangi claim still under negotiation with the Crown.

The Ministry closed Hato Petera College in August and a group, who are part of the iwi but represent the Turoa and Peters families, moved in to occupy the school in protest of the Church not meeting their agreement and retaining the land.

While the full dispute is yet to play out in court, the church won a High Court order late on Tuesday afternoon to put an end to the occupation.

Justice Jagose said the protesters were to leave the site immediately and gave them 48 hours to remove their possessions.

That deadline expired shortly after 4.30 this afternoon.

When RNZ visited the site around 10 people were gathered beside their cars. While they declined to comment they said staff from the Diocese had been to visit and they had packed up their things.

As the deadline came around a small procession of cars left the site, leaving the site empty except for their painted signs and flags.

A spokesperson for the Catholic Diocese said it was a good outcome and they hoped they could now get on with looking at other opportunities for the site with a number of education offers already put forward.