It is 10 years since Tame Iti and Rangikaiwhiria Kemara were sent to prison on firearms convictions after the 2007 Tūhoe raids, and both men now want to pursue a royal prerogative of mercy. 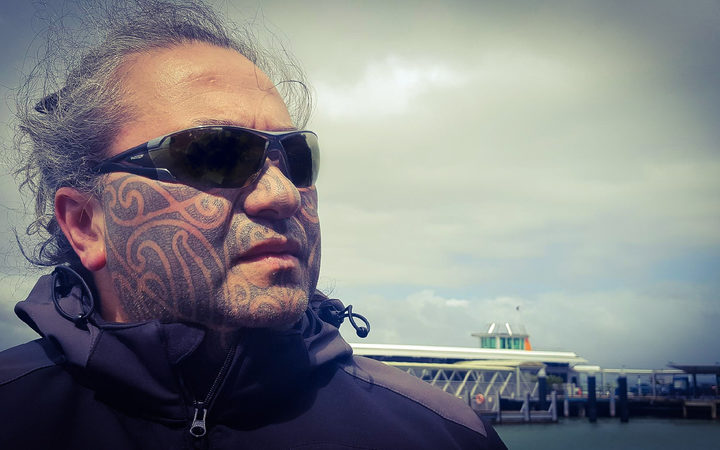 If it weren't for the Ta Moko etched in his face you might not recognise Te Rangikaiwhiria Kemara immediately.

He and Tame Iti were sent to prison for the illegal possession of firearms but he said it's the allegations of terrorism that have been the life-long persecution.

"Where you have terrorism hanging over you it kind of overshadows everything.

"They will google your name and as soon as they see that phrase they cannot run fast enough."

On the tenth anniversary of his arrest, Mr Kemara is now looking to pursue a royal prerogative of mercy.

Mr Kemara is from King Country iwi Ngāti Maniapoto, an iwi labelled by the Crown last century as "rebels" after it provided shelter to other iwi at war with the British. Now he's known as a terrorist and he said it was just a continuation of the same set of ideas.

'It was absolutely terrifying for [the children] to be lined up'

Ten years ago the country woke to news of home-grown terrorism.

Mr Kemara and 16 others were arrested under the Terrorism Suppression Act, and he recalls waking to multiple guns aimed at his head.

He was living with the Lambert family in Manurewa at the time and said he was still distressed about the way police treated the children in the family home.

"They lined them up against the fence very much in the firing squad formation. It was absolutely terrifying for them to be lined up and have masked men with rifles to their heads."

One of those young girls was Patricia Lambert, who told her story to the documentary makers of the film, Operation Eight.

"I just started crying and crying and my nan tried to ask if I was okay and the policeman told her to shut up and pointed the gun down at my head."

Further down the country armed police had blocked Rūātoki roads, searched cars and homes, and detained people at gunpoint.

An Independent Police Conduct Authority found some of those actions to be unlawful, unjustified and unreasonable and in 2014 the police apologised to the people of Tūhoe.

Mr Kemara was surprised at how quickly the media gathered.

"The day of the raids you had this very clued-up media that usually would take a few days to get lots of details and all of a sudden you had media that weren't Māori that had what looked like details inside a police operation."

Police said they had shut down a group of activists running military-style guerilla training camps.

Mr Kemara, a seasoned hunter with a gun licence, remembers the wananga, or camps, very differently.

"Most of the time the guns weren't loaded. We were teaching right from the start gun safety - it was the first module," he said.

"We were teaching them how to safely store, unload - and there were many licensed holders there, hundreds of people attended the wananga."

Initially he did not link his arrest to the wananga in the bush but once he had seen the police affidavit he quickly realised.

"The original accusation that came out was IRA-style terrorism, which involved making bombs and having automatic rifles and an imminent threat to the country."

He recalls media reports of napalm bombs. In retrospect, Mr Kemara said the number of armed police and the way in which they entered the house should have been a sign of what was to come.

Charges were laid under the Terrorism Suppression Act but later withdrawn after Solicitor-General David Collins ruled they could not be used. While he would not use the Act, he did commend the police on their professionalism.

The Solicitor-General's decision meant that any telephone interception evidence could not be used, including conversations about US President George Bush, which Mr Kemara suspects were recorded in his car.

He had a sign attached to his sun visor warning people the car may have had a recording device in it but he said it had the opposite effect and passengers would work up fantastical stories.