A South Auckland monument commemorating Colonel Marmaduke Nixon, who led troops into Rangiaōwhia where a dozen people were killed, may be in for a history makeover. 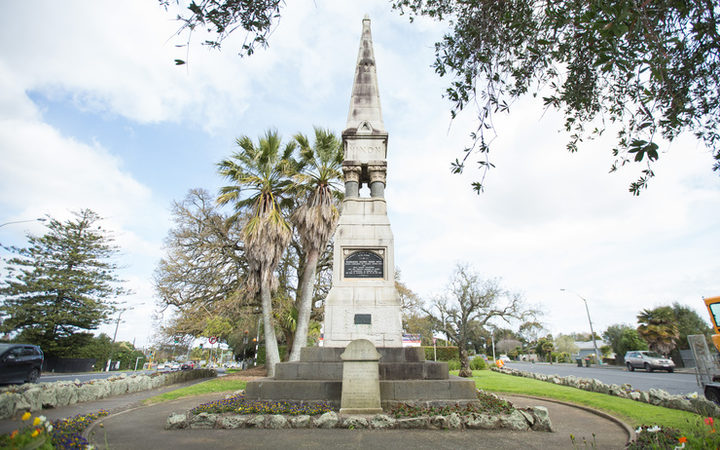 Auckland's mayor, Phil Goff, has responded by convening a council team that will consider how best to ensure the concerns of all parties are represented and addressed.

Mr Te Pou said, when it came to the 1864 invasion of the Waikato village of Rangiaōwhia by colonial troops, too many people had only looked forward.

"A large part of our history has been cleansed. And I think we have to confront it, we have to talk about it, and I think if we are able to do that as a nation we can nation-build and we can move forward, so I am pleased from that perspective."

"I applaud that. I also think they should take advice from te ao Māori for the wording and to make sure that the other side of the story is actually told."

Tāmaki Makaurau MP Peeni Henare, from Labour, is also the chairman of the Ruapekapeka Trust, a tribal organisation for Northland's history. He said the issue went beyond just Auckland.

"I think that the council is leading the way but in fact it should be nationally led because I dare say there are other statues like this across the country."

One of Col Nixon's descendants, who did not want to be named, said his main concern was that his ancestor's remains stayed at the base of the monument - a concern that was shared by Mr Te Pou.

"I don't think it has the protection that waahi tapu should behold so I do think that needs to be addressed."

But Mr Te Pou has gained support from Col Nixon's descendant to add a plaque to the site.

"I'm certainly not opposed to it. I believe there is actually room for it on that monument," the descendent said. "There are two sides to this, it's more that we remember the land wars from both sides, because they were the formation of the [New Zealand] that we have today."

RNZ has received a wide range of responses to last week's story. Some challenged the version of history given by iwi about the events at Rangiaōwhia. One complainant said claims that the village's church was burnt were unsubstantiated.

Mr Papa, whose ancestors were from Rangiaōwhia, said there were many ways that history could be recorded.

"One of our tūpuna in particular was burnt in the church, two of them escaped out the window and looked from the swamp land as they were burning in the flames, so we hold those as very dear family histories. We also have the writings of Wiremu Tamihana at the time, who talked about the invasions into Rangiaōwhia."

Col Nixon's descendant agreed New Zealanders needed to know more about their history, but he too disputed that the church was set alight.

"I've looked into Colonel Nixon's history and I came across at least eight or nine accounts, all slightly differing, but certain things they agreed on - there was no church-burning, it was war for sure."

He said the iwi should decide what was written on the memorial for their people and he would be happy to be involved if he was needed.