Meet the 27-year-old Wellingtonian donning the Wallaroos' green and gold jersey at the Women's Rugby World Cup in Ireland. 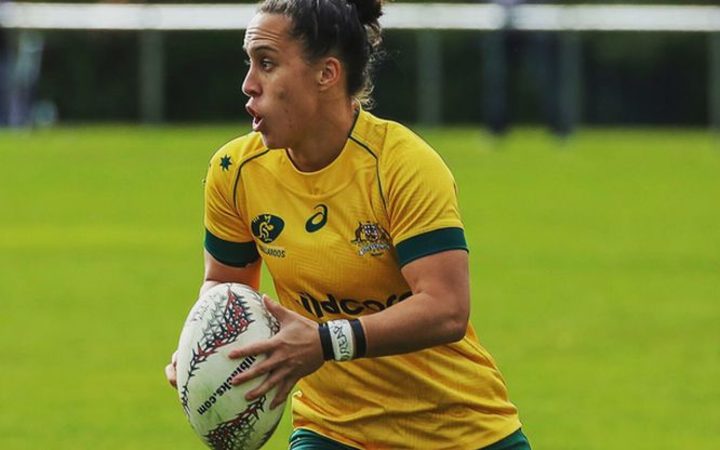 Fenella Hake is one of a number of Māori representing Australia at the 2017 Women's Rugby World Cup in Ireland.

The 27-year-old grew up in Wellington and is looking to make her mark with Australia's national 15-a-side team, the Wallaroos.

She was playing in front of her friends and whānau in the Four Nations Cup held earlier this year.

However, she was lining up in the green and gold strip of the Wallaroos and singing the Australian anthem.

"It was really quite special being able to stand there with the girls," Hake said.

"Everyone .. having a common goal to be there and put the gold and green jersey on and do the mahi... it was really special."

Hake's whānau comes from the Tuhoe stronghold of Ruatoki and she started playing rugby when she was six years old.

She made it into the training squad for the Black Ferns, but said personal issues checked her progress. She then followed friends to Brisbane to start a new life.

This year she turned her focus to making the Walleroos and impressed selectors while playing for her Queensland club side the Redland Mudcrabs.

Even though she's now representing Australia, Hake said it's hard to shake the Kiwi connection in Dublin.

"It's quite funny that quite a few people have mistaken us for the New Zealand team, I think because of our accents and because there's a whole bunch of brownies."

Hake's next chapter will include a season of university rugby in La Coruna, Spain.

Her sister, Tiana Hake, said Nella has made the most out of playing for the Walleroos, and her whānau was incredibly proud of her.

"It's only going to get bigger and better for her hopefully."

Richard Goss, head coach of the Redland Mudcrabs, said Hake was maturing both as a person and a player and it reflected in her selection into the Wallaroos.

He said Māori and Pacific players lifted the prominence of women's rugby in Queensland.

"Without our Pacific Island and Māori people over here rugby and women's rugby wouldn't have as much support as it does - they really bring a lot to the competition."

The Wallaroos will play for fifth position against Canada, as the Women's Rugby World Cup wraps up with finals action this Sunday.