The Department of Corrections has launched a new haka in a push to get more Māori working in prisons.

Forty-six new recruits took up the challenge to perform the haka at their graduation ceremony in Wellington. 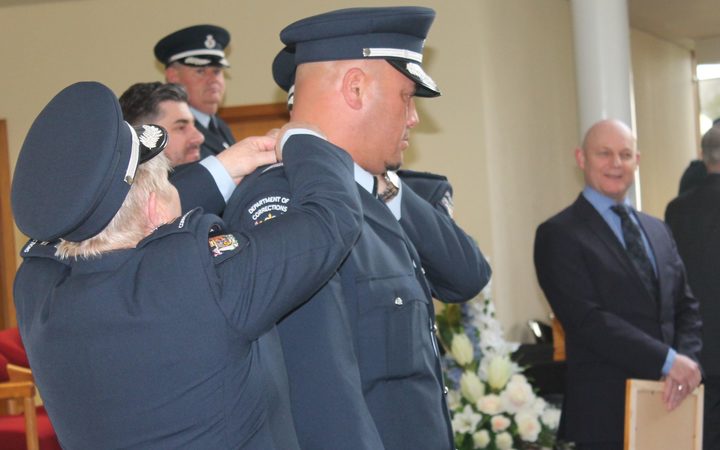 Quentin Manuel gets his epaulette to become a Corrections officer. Photo: Supplied

The haka is non-iwi affiliated and neutral, and is meant as a challenge for Maori to step up and accept the role of being a change agent working as a Corrections Officer

It is also achallenge for Maori offenders to rise up and be all that they are called to be, and to not return to prison but be the role-models that their families and communities needed them to be.

New recruit and haka leader Quentin Manuel said learning the haka was a difficult feat for many members in his cohort who come from different backgrounds and cultures.

"As corrections officers, we are dealing with people who are challenged with everyday problems that we probably take for granted.

"The haka was our challenge as corrections officers - it's getting out of your comfort zone, it's learning a new culture and a new language. And then going out there and performing that haka."

Mr Manuel grew up in Otara in South Auckland where he was often exposed to a life of gangs and violence.

He said the police set a positive example growing up and it became a calling for him to work in corrections.

Mr Manuel said many of his family members were still in prison.

"I prove to them that if you put your mind to it and set some goals, like becoming a corrections officer, it can happen."

Māori Director for the department Neil Campbell said just over 20 percent of the 8000 correction officers in New Zealand are Māori.

He said the haka will set the challenge for even more Māori to take up the role.

"One thing that resonates with Māori is the idea of taking up a challenge.

"It also becomes a mechanism for unifying those correction officers and reminding them that this work is challenging, that this work does take people with humility and with compassion for others."

Mr Campbell said it is important Māori in prisons are surrounded by positive Māori role models who will shape their behaviour when they are released back into their communities.

"Many people probably don't feel that prisoners deserve compassion or dignity or humility or any of those things but ultimately the vast majority of these people are going to come back and live in their communities.

"You want people working with them who are able to role model the types of behaviours and attitudes we'd like to see them come back into the community with."

Mr Manuel agreed, and said Māori prisoners need to see strong Māori role models - who share their culture and who can relate to their unique life experiences while they're in prison.

He said there is a relationship between Māori prisoners and Correction workers that stem from their similar cultural roots.

"They know that I'm an officer but they also know that I have a background of marae and anything to do with Māori, so they are comfortable."

Mr Campbell said Corrections was already the second biggest employer of Māori in the country within the public sector, and he wanted to continue to build that number.

The translation, in short, says:

The challenge has been laid, rise, rise!

To join together as one, weave that which binds people so we can move forward from darkness into light!

The challenge has been laid, rise, rise