A group of Māori and Pākehā grandmothers want conservation orders placed on 38 rivers on the South Island's West Coast. 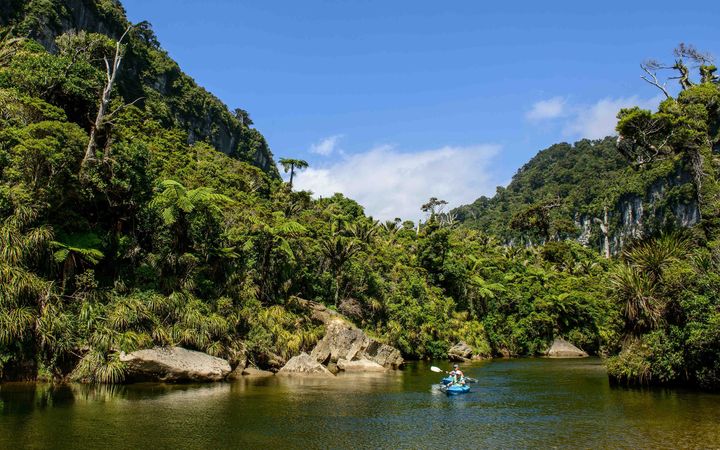 Porarari River in Punakaiki on the West Coast of the South Island. Photo: AFP

The women, known as the Grandmothers of Waitaha, are backed by conservation groups and have applied for orders restricting the commercial use of the West Coast rivers.

Minister of the Environment Nick Smith said he would consider the bulk application on its merits.

Fifteen New Zealand rivers are currently protected by conservation orders, with another two, for the Ngaruroro River and the Waikoropupū Springs, now under consideration.

Conservation orders recognise the intrinsic value of a body of water and seek to protect it.

The orders can stop a regional council issuing new water and discharge permits, although they cannot affect existing permits.

The Grandmothers of Waitaha filed the application to protect rivers form Punakaiki to Haast yesterday.

The group's membership is spread around New Zealand, but they claim common whakapapa from the waka Uruao.

Spokeswoman Jane Ruka said the group wanted to halt the use of pristine West Coast rivers for electricity generation, water-bottling and other commercial enterprises.

Ms Ruka said the pollution and exploitation common in North Island rivers was creeping south, and the grandmothers believed that needed to be stopped in its tracks.

"It's not just the Waitaha grandmothers who are out there being concerned," she said.

"It's every grandmother who has the power to think in New Zealand, and every mother who looks towards the rivers and waterways as somewhere safe where children can swim in hot weather and take food out of, in some instances."

Ms Ruka said the catalyst for the action was a scheme to build a power plant on the Waitaha river and a recent application to renew consents to take water from the Arawhata, below Mount Aspiring.

The move to protect West Coast rivers has strong support from other conservation groups.

Forest and Bird and Federated Mountain Clubs helped to pay the $1000 application fee.

The club's secretary, Jan Finlayson, said rivers were an essential element in the New Zealand way of life and selling water, in particular, threatened that.

The head of Save Our Water New Zealand, Jen Branje, said people had lost faith in local and central government to protect water.

"It's probably time care was transferred over to local and iwi groups, for the betterment of the waterways themselves."

Dr Smith said he had not had a chance to reads the grandmothers' application.

"I'm quite supportive of water conservation orders; they're the equivalent of National Park status for a water body," he said.

However, he said the grandmothers' submission was unusual because it lumped so many rivers into one application.

He said he would take advice from ministry staff before deciding if it should go any further.