Labour MP Nanaia Mahuta is calling for transparency from Māori Party president Tukoroirangi Morgan, saying he may be confusing iwi business with politics. 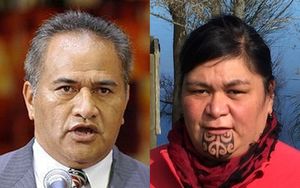 The Labour MP said she believed their iwi, Waikato-Tainui, deserved committed representation, and the only way to fix what she said was a growing negative perception would be for Mr Morgan to disclose exactly what he did for the iwi.

She said she did not have evidence that he was being paid by the iwi but it was a question that had been raised by her constituents.

"There is a growing level of unease across people who have reflected their concerns to me about a blurring of boundaries in terms of Tuku's role as a representative of the tribe in various capacities and also [as] the president of the Māori Party - and somebody is paying for what he is doing."

Ms Mahuta did not believe there was a high enough level of disclosure from Mr Morgan, certainly in his tribal capacity about what he was reportedly being paid and what he was doing on the tribe's behalf.

Three weeks ago, the Māori King said in his annual speech that he would no longer vote for the Labour Party.

Ms Mahuta said: "This is a direct response to the issues that Tuku has raised challenging the effort of Labour Party Māori members.

"I'm just asking a question and I think it's a fair one."

She said she and Mr Morgan had not spoken since the king's koroneihana.

Asked if this was an indication she was going to stand for the Hauraki-Waikato Māori electoral seat next year, she said: "This is a signal that if Tuku wants to make real the challenge he has put to Labour, he better announce his candidates early."

RNZ tried contacting Mr Morgan but was unable to reach him.