The head of South Island's biggest tribe is to step down, with Sir Mark Solomon leaving his post at Te Rūnanga o Ngāi Tahu later this year. 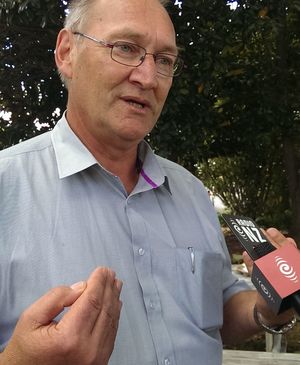 He effectively cannot be the head of Ngāi Tahu if he is not the iwi's representative for Kaikoura - a role he has decided to quit.

Sir Mark said he was proud of how far his tribe had come since its treaty settlement with the Crown.

Earlier this month he spoke out about an historical sexual abuse case in Kaikoura, saying the complainants were some of the bravest people he knew.

Sir Mark said the descendants of Kuri, the hapū in Kaikoura, were facing a challenging time.

He added that his whanau had found it difficult living within the community, knowing some of their whanau had been perpetrators - or victims - of sexual abuse.

The Ngai Tahu Claim Settlement Act passed in 1998 and, after generations of grievance, the iwi has established a considerable asset portfolio, including leasing tribal-owned property back to Crown agencies.

In announcing that he will not seek re-election as the Te Rūnanga o Ngāi Tahu Representative for Kaikoura, Sir Mark said:

"With the change in the executive at my runanga of Kaikoura over administrative processes and practices, I have considered my position as Kaikoura representative, and I have decided not to seek re-election.

"I envisage I will remain representative for Kaikoura until later this year when the Kaikoura election process is due to be completed.

"I am proud of how far we have come since settlement however, there is always a great deal of work to be done and we will continue to focus on that," he said.

Ngāi Tahu kaumatua Kukupa Tirikatene said it was sad Sir Mark was stepping down, but hoped he would still work for the iwi in some capacity.

Mr Tirikatene said one of Sir Mark's best attributes was his giving nature and remembered how he helped unite the Christchurch community together after the earthquake.

"During the earthquake most iwi responded, Waikato-Tainui sent some nurses and they said they came to help Ngāi Tahu and Mark said publicily, you come to help everybody that needs help, not only Ngāi Tahu. I believe those few words broke down a lot of walls that some people have about Māori Pakeha relationships."

Mr Tirikatene said Sir Mark had a common sense attitude which he applied to everything and even helped other iwi with their Treaty Settlement money.

"There is no use other iwi falling into the same pitfalls as Ngāi Tahu so he's offered them suggestions and let them know what worked for us and said this could work for you."