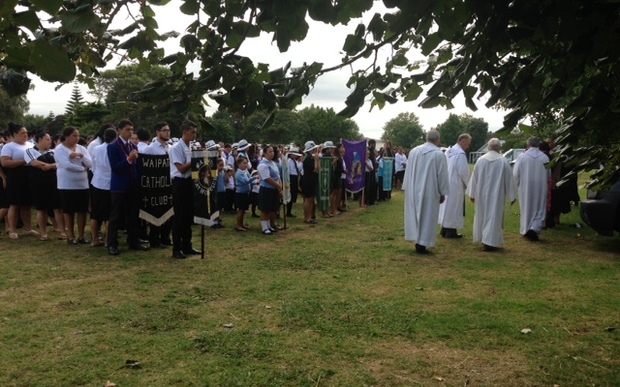 Catholic clubs line up for the religious parade on Sunday at the 70th Hui Aranga in Whanganui. Photo: RNZ / Leigh Marama McLachlan

The annual event, which celebrates being Māori and Catholic, marked its anniversary with kapa haka, sports and speech competitions.

Its traditions have been in place since the event began in 1946. 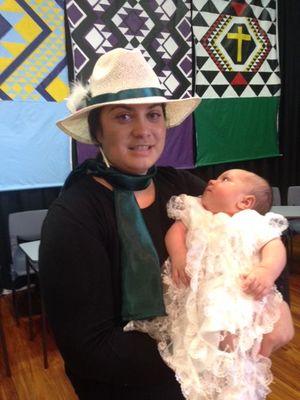 In an interview captured in 1967, Reverend Father Wall explained that the hui was about creating good standards in all fields.

"Māori clubs or districts meet competitively in various fields, for the purpose of promoting the spiritual, social, cultural, sporting and material wellbeing of our Māori people."

That was evident at this year's event, with hundreds of people gathering at Whanganui Girl's College over the long weekend to watch and compete.

The crowd-pleaser was the kapa haka. St Peter's Chanel Catholic School took out the senior competition, St Vincent's won the junior section and Parikino came first for the midgets.

It was a strong comeback for St Vincent's, which did not take part in the hui last year.

Racquel McKenzie performed with St Vincent's as a young girl in the early '90s and was back on the stage this year.

"The Hui Aranga is a special part of not just my life but my entire family's life. It is a time to celebrate being Māori and being Catholic at this special time of the year."

A key part of the hui was coming together with whanau and friends, Ms McKenzie said.

She was one of many parents who had their children baptised on Sunday - something the church hopes will mean more youth engage in the hui in the future.

There was no mention of chocolate or Easter eggs, with most of those spoken to by Te Manu Korihi reflecting on Jesus Christ and coming together.

One kuia said the hui was about getting Māori people united in peace.

Next year's event will be held in Tauranga.