The Māori Broadcast Funding Agency (Te Māngai Pāho) is urging iwi radio stations to change the way they operate if they want to thrive in the digital world. 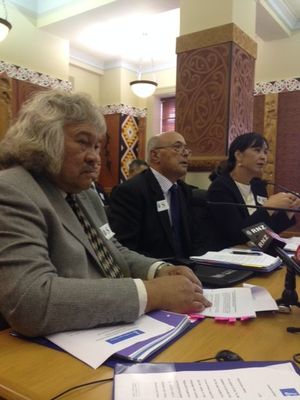 Te Māngai Pāho chief executive John Bishara said the days of traditional radio were numbered and the future of broadcasting was in the likes of podcasts, apps and streaming online.

At the agency's 2014/2015 annual review before Parliament's Māori Affairs Select Committee, Māori MPs were told it funded 1424 hours of television in that year - pouring more than $54 million into TV, radio and, for the first time, web series.

Mr Bishara said the agency was no longer looking at investing in radio broadcasting through terrestrial transmitters because the future was in a digital world.

"If we can connect our radio stations quicker, faster and smarter via the internet it would increase our audiences - but also there has to be some change in the way that iwi radio stations are actually operating at the moment," he said.

Technology was paving the way forward and podcasts were going to improve the effectiveness of Te Māngai Pāho's spending, he said.

Mr Bishara said about half of those stations had new and younger managers to take the helm, which he hoped would help with efforts to modernise.

Te Māngai Pāho was working with the National Māori Radio Network on how it could respond to the digital world and it keen to develop more modern training programmes.

"There are plans afoot to actually move our iwi radio stations from where they are today to where they are going to be in 12 months," Mr Bishara said.

Awa FM in Whanganui is one of those undergoing a 12-month "transformation".

Station manager Panapana Pene said exciting changes were under way during the next year to keep up with technology but right now there was a strong focus on social media.

"There is a lot of technology out there and it is forever growing nowadays. Realistically, if our iwi radio stations don't move with that then we may be left behind."

Ms Pene said not all iwi stations were at the same level but she was confident Te Māngai Pāho would provide them with the tools needed to digitise.

Station manager Peter-Lucas Jones said it was the best way to connect with its audience, adding that most of its iwi members lived out of the region.

"We use the live video stream as a way of promoting the event as well as promoting the on-demand digital content that will be developed.

"The on-demand digital content is probably where we get the most activity."

Going "over and above" had not been cheap or easy, Mr Jones said.

The resources for the live streams had largely come through time, energy and support from iwi members, he said.

Mr Jones was expected to be among those meeting for the National Māori Radio Network hui in Auckland on Wednesday, where he hoped this would be discussed.