Indigenous Australians in Perth are praising Māori in both New Zealand and Australia for protesting in solidarity with them over their government's plans to shut down remote communities. 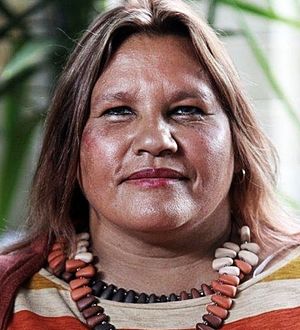 Western Australia Premier Colin Barnett said he would be forced to withdraw essential services to those rural communities, because the one-off $90 million payment by the federal government to maintain the settlements would run out in three years' time.

Support from Māori has been noted by Aboriginal media organisations such as the National Indigenous Radio Service, as well as a Noongar leader, Michelle Nelson-Cox, who is chairperson of the Aboriginal Health Council of Western Australia.

"If there's any other ethnic groups that understand what our complications are as Aboriginal people, it would be the Māori mob over there [in New Zealand]," Ms Nelson-Cox said.

"So I want to express that, and that's from a Noongar woman, that's moorditjit (Noongar word for 'awesome') and that's very humble, and we appreciate that."

International rallies on 1 May

In the meantime, protest rallies have been organised in every state and territory capital by an Aboriginal rights movement, #SOSBLAKAUSTRALIA.

And the leader of the Māori rights movement Iwi n Aus, Erina Morunga, of Ngāpuhi descent, who is based in South Australia, is calling one people to join a march in Adelaide that will coincide with a protest hīkoi in Hamilton in New Zealand on 1 May.

A group set up on social media - Call to Action Adelaide - is also behind the rallies.

It is calling on anyone who is against the Western Australian government's plans to shut down remote Aboriginal communities to take to the streets and demonstrate their opposition, and send a clear message to the State Premier, Colin Barnett and the Australian Prime Minister, Tony Abbott, that they don't agree.

Protests will take place in about a dozen towns and cities across Australia on 1 May and also as far away as the United States, with one planned in Los Angeles, California.

Mr Abbott has suggested that people living in indigenous communities are making a 'lifestyle choice' that his government cannot 'endlessly subsidise'.