A new charter kura says some of its students have come to its classes because they were close to being kicked out of their old schools. 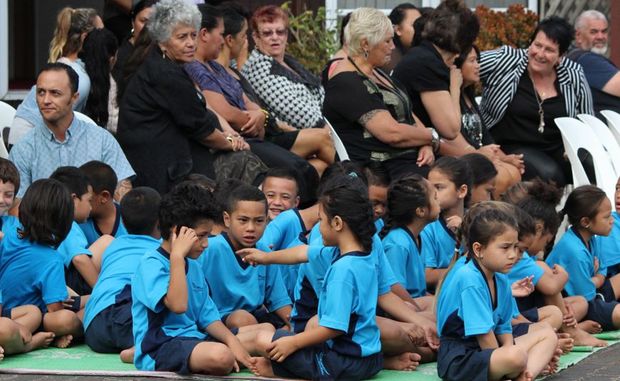 The morning started with tamariki kitted out in their navy and sky-blue uniforms delivering a melodic and lilting performance of He Honore.

With charter schools a policy of the ACT Party, its leader David Seymour was also on hand for the formalities in south Auckland.

"We are opening a brand new school as part of a nearly brand new policy, and those families of those whānau [are] entrusting the most valuable thing they have to this concept.

"I'd like to salute all of the people who have put their tamariki forward to be part of what is a bold initiative to enrich the lives of the people at the school and all of New Zealand."

The school is operated by the Manukau Urban Maori Authority, while its head is the broadcaster and former politician Willie Jackson.

"As you said, David, it's about our kids: the kaupapa is the main thing here.

"You either get involved or you get out".

The kura's tūmuaki, Tania Rangiheuea, said some of her pupils had been in trouble with other teachers in the past.

"A lot of our children have come here because they were on the verge of getting kicked out of their school.

"Some of them have behavioural problems - not all of them - most of them are really, really good kids and I love them.

It is her first time leading a school; previously she has been a lecturer at Victoria University.

She said the kura's philosophical approach to education involves the whole lives of students and whānau - not just the time pupils spent in the classroom.

Tania Rangiheuea said her people were good at finding out what makes the tamariki tick.

"I have a full time Whānau Ora navigator attached to the kura; she goes in and works with the families.

Te Kura Māori o Waatea said its roll would expand from 40 to 60 when its new classrooms were built.