A trustee at a Northland marae that was damaged by fire is hopeful rebuilding will get underway by August next year. 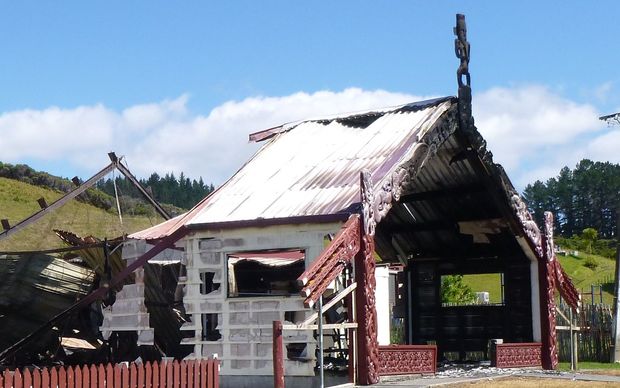 The blaze destroyed the wharenui and wharepaku. Photo: Clive Stone

The pa is trying to raise more than $2 million to construct a new meeting house and wharepaku at Mokau Marae, near Whangarei.

The buildings were destroyed by fire - thought to have been started by two children playing with a lighter, more than a year ago.

Marae trustee Clive Stone said a building plan had been drawn up, and if it could get the mandate from the people to go ahead with rebuilding this weekend, he said construction could start next year.

He said its target was to start work in June or August.

Though, Mr Stone said its target had moved twice before because of compliance matters such as replacing its septic system.

He said the build was going to cost about $2 million, and nearly $250,000 would be needed on top of that to install new sprinklers to comply with building practices.

Mr Stone said this weekend's hui would seek mandate, as well as discussing how to fund raise, and how it would be able to have its insurer to payout just under $400,000.