A Northland marae says it has faced continual challenges in trying to rebuild its fire-ravaged buildings including a $250,000 bill to install new sprinklers. 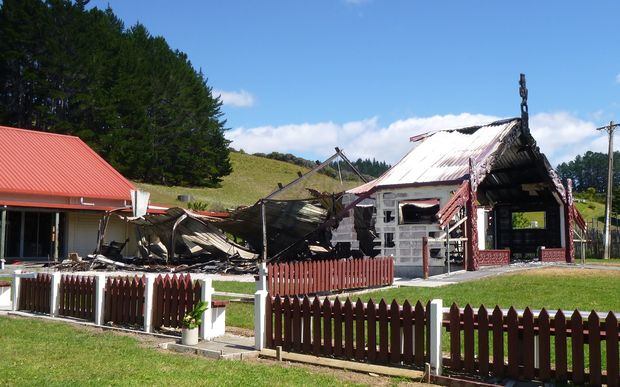 The blaze destroyed the wharenui and wharepaku. Photo: Clive Stone

The blaze left the wharenui and wharepaku at Mokau Marae near Whangarei as burnt-out shells on 8 November last year.

Two young boys were thought to have started the fire.

One of the marae's trustees, Clive Stone, said the rebuild looks like it would cost between $1.9 million and $2.2 million.

Just under $400,000 has been collected through insurance payouts and fundraising, and the marae is about to start applying for community grants.

However, Mr Stone said progress has been slow and there had been a number of unexpected costs including $250,000 for the sprinklers and $60,000 for an improved power supply.

The rebuild plans would be taken to the community for consultation next month, he said.