A leading campaigner for the preservation of Te Reo Maori has been awarded a Companion of the New Zealand Order of Merit (CNZM) today at Government House in Wellington. 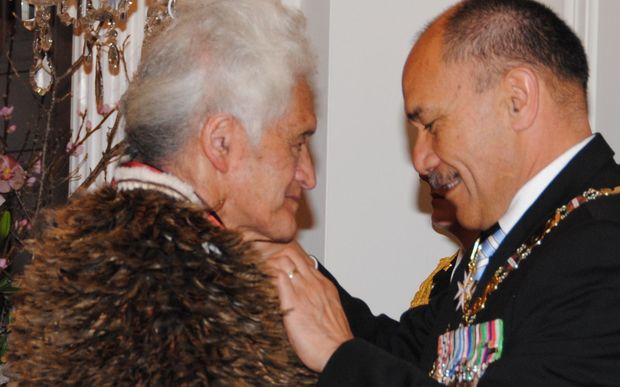 Huirangi Waikerepuru was made a Companion of the NZ Order of Merit for services to Māori. Photo: SUPPLIED

Huirangi Waikerepuru wore a korowai made of weka feathers when he received the award from the Governor General, Sir Jerry Mateparae, for his many achievements in promoting and revitalising the language.

Mr Waikerepuru was a driving force behind the Te Reo o Taranaki movement, chaired the Wellington Maori Language Board and was a leader in Waitangi Tribunal claims including the 1985 claim for the official recognition of Maori language.

Mr Waikerepuru said to ensure the survival of Te Reo, it should be compulsory for everyone to learn Te Reo at school.

He said the whole process of language development needed to be put in place to ensure that those who cannot speak Te Reo are able to learn it alongside everybody else who can.

He questioned the purpose of education if the language of the landscape is not spoken.