At least a dozen tāngata whenua will be recognised as part of the investitures at Government House in Wellington this week. 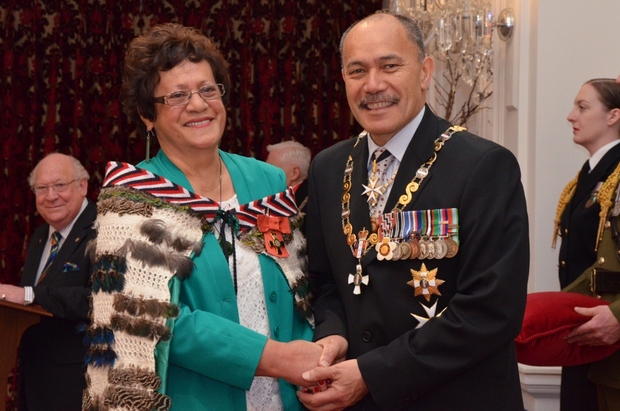 Kataraina O'Brien, of Ngāti Awa, Ngāti Pikiao and Ngāti Maniapoto, was made an Officer of the New Zealand Order of Merit. Photo: SUPPLIED

Governor General Sir Jerry Matepārae is hosting the four days of events, which started on Tuesday.

On Tuesday, Kataraina O'Brien, of Ngāti Awa, Ngāti Pikiao and Ngāti Maniapoto, was made an Officer of the New Zealand Order of Merit for her work with the Māori Women's Welfare League.

She was also recognised for her work with Te Tuinga Whānau, which offers free social work, advocacy and support services.

Ngāi Takoto descendant Rangitāne Marsden was also made an Officer of the New Zealand Order of Merit.

The chief negotiator for the tribe's treaty settlement has led it through two decades of Waitangi Tribunal hearings and negotiations with the Crown and has been a driving force in the establishment of Te Hiku governance entities. Alistair Boyce, of Ngāti Kahungunu, was awarded a Queen's Service Medal for his work as the deputy-head of Queen Charlotte College, where he helped inspire young Māori to succeed.

Mr Boyce worked there for 39 years and said that for many years the kura had the highest proportion of young Māori in the South Island.

He said it was important to him and the school that Māori were given an environment that was culturally supportive to achieve their maximum potential.