The Maori Party's Tamaki Makaurau Rangi McLean candidate hopes to be the first MP in living memory to enter the house with a full face moko. 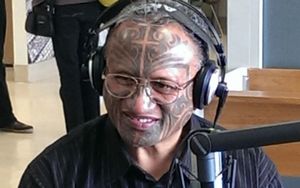 The other Maori MPs adorned with a moko were Tareha Te Moananui, who was the first tangata whenua MP to speak in the House and represented the Eastern Maori Electorate from 1868 and 1870.

The only other MP with a moko was Karaitiana Takamoana, who also represented Eastern Maori Electorate from 1871 to 1879.

Mr McLean said tāmoko was a living art form and was a strong statement he wears to honour the traditions of his ancestors.

He said that in the 21st century the artform had been revived as part of the overall revitalisation of Maori culture in Aotearoa.

In current polls for the Tamaki Makaurau seat, Rangi McLean is polling at 28 percent. Labour candidate Peeni Henare is on 27 percent.