All Blacks utility Jordie Barrett is all smiles after avoiding further punishment from his red card against Australia last weekend. 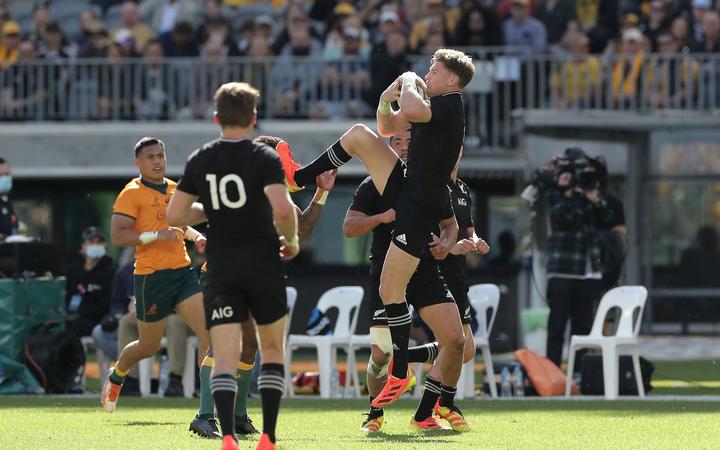 Barrett was given a red card in the first half of the final Bledisloe Cup test when his boot made contact with the face of Wallabies winger Marika Koroibete after jumping in the air to catch a high kick.

But he would be free to play in Sunday's Rugby Championship test against Argentina on the Gold Coast after a Sanzaar judiciary on Tuesday night found the fullback not guilty of dangerous or foul play.

Barrett said he was grateful to avoid further sanction.

"It was a long process, very thorough and [the panel] handled it very well ... I'm rapt with the outcome.

"They could see I had no intent to hurt Marika. He's a well-respected opponent who I'm happy came away with no serious injury."

Mooar said they were always confident in their case, especially given Barrett had never had a similar incident in more than 100 first-class matches.

"We're dealing with a situation where a player was charged with a reckless or dangerous act, and for us it never was that.

"He's come up, the sun in his eyes, he's mis-timed his run and approach … it's got big on him if you like, he's ended up having to go back to catch it whilst he's in the air, and as a result of going back the leg's going to come up."

Mooar said while the coaching team was relieved, that relief was even more acute for Barrett himself.

"It's a hell of a thing to be red carded playing for your country. He's devastated by that in the moment, but will grow from the experience, what he's been through."