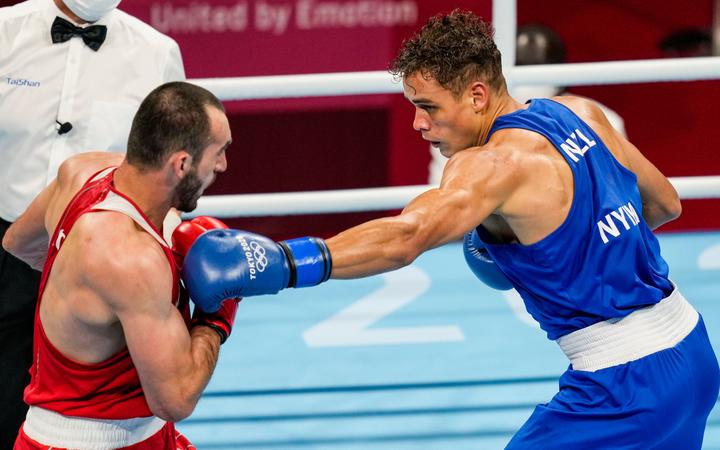 David Nyika has lovely sad eyes for a boxer, eyes that seem to say it pains him deeply to have to punch an opponent.

But punch them so well he does, that we are here to see him fight for a bronze medal - or maybe more.

We cross live to the ring from TVNZ's Olympic Games Tokyo 2020 just before the Lisa Carrington canoe show kicked off.

It's always jarring to watch boxing at the Olympics, to see something as primal as controlled fighting overseen by men in suits.

And there they are; judges in bow ties, behind them, organisers in perfect blue suits with straight red ties.

Our referee for today looks like a croupier from Sky City, tie, white shirt and gloves.

And there's David Nyika, a favourite of those of us out here in amateur Olympic land. He's handsome, unfeasibly so. He has a perfect, neat haircut. He is 6 foot 3. He ducks and weaves. He probably looks fantastic in a suit. 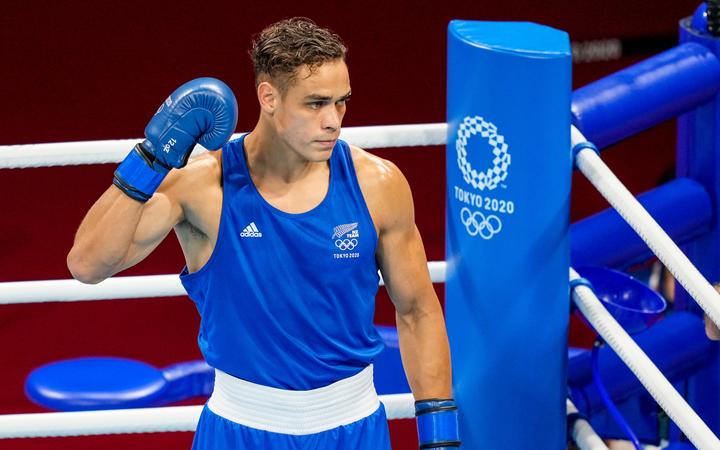 Everything surrounding the ring is dressed up. It's only out behind the lights that things come apart a bit. Up in the otherwise empty stands there is a paunchy bloke in a T-Shirt and cargo pants, playing on his mobile phone. Standing next to the ring are two young blokes from the TV network; they too are wearing T-shirts and cargo pants, holding the boom mic and camera so all of us on our couch can hear every 'oof'. They look blank, bored as they wait for the flurry of fighting ahead.

Big, bass-y rock anthems rock out around the empty stadium. An announcer with an American-Japanese-British-boxing announcer accent is hollering out messages with emphasis on every other syllable, regardless whether it is right or wrong.

Out here in Olympic couch land we have liked Nyika ever since he told Sky Sport this bout was going to be "a barn burner". We're ready to burn some barns with him.

The man from Hamilton is up against the man from Nitilsukh, Russia, the wonderfully-named Muslim Gamzatovich Gadzhimagomedov.

The New Zealand stand-in flagbearer at the Tokyo Opening Ceremony versus the favourite, the world champion, the Russian guy from American boxing movies.

It starts even, and becomes less so as the bout progresses. The boys on the mic boom and the camera still look bored; it's been a long day.

Our commentator - one of the contingent of dozens of British or Irish commentators at every sport of this Olympics - keeps up a fine patter over the sound of ugh, ugh, ugh as the athletes hit and are hit.

"Neither look like they are settling for a bronze - just yet.

"Nyika has to fine tune the radar. He gets clipped after that flurry.

"Whatever happens for David Nyika today, I wouldn't be surprised if he get offers. He's charismatic, he's good looking and he's very very smart."

Another bloke in cargo shorts wanders across in the background while our two athletes go at it.

"We are seeing flurries of success now but not spells of dominance for Gadzhimagomedov.

"Nyika has landed some good punches but his opponent Gadzhimagomedov has upped his workrate now - and he is going well."

"Gadzhimagomedov is managing this fight now. He is making sure nothing silly happens."

"It's been quite a journey for Nyika, quite a story and quite a future. But he's going to have to settle for bronze - and he knows it."

Finally the stadium announcer is back ... The Win-NER on split De-CIS-ion is ... not our man.

But he has the bronze, New Zealand's first medal since David TUUUUU-AAAAAAA in 1992.

We cross back to TVNZ for full analysis of our breakthrough boxing medal. There is Ian Ferguson, the canoeist looking like the affable boss who has turned up for Friday after-work drinks. He is here for the Lisa Carrington race.

Toni Street has to fill time; she turns to Ferguson. Boxing is not his sport. What do we think of the Russian boxer, she asks brightly as always.

Ferguson summons his knowledge of Russian boxing: "You have to look out for the Russians. They practice their procedures over and over. They are hard headed, probably been hit so often. Tough as nails. You wouldn't want to fight them. One punch isn't enough..."

Sadly, just as Ferguson is warming to his boxing analysis, Street cuts him off. Lisa Carrington's time has come. We are off to the canoeing.