Three New Zealand sailing crews are in the running for medals at the Tokyo Olympics. 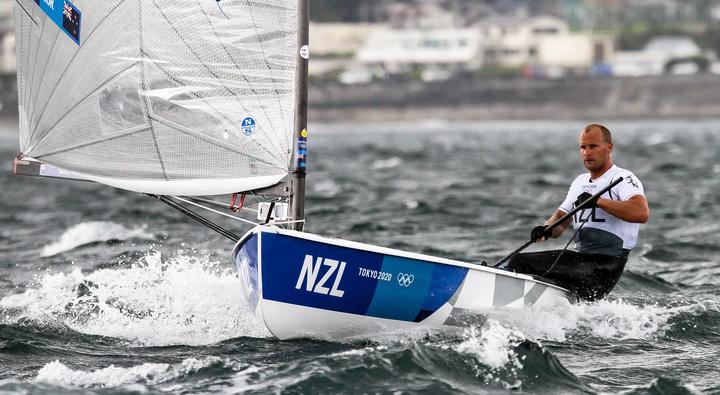 Defending gold medal 49er sailors Peter Burling and Blair Tuke fought back from a rough start to their regatta to go into today's double points medal race with a four point lead.

However they know they'll need to finish strongly to win back to back golds.

Josh Junior is fourth in the Finn heading into Tuesday's top-10, double points medal race and Paul Snow-Hansen and Dan Willcox are fifth in the men's 470 with two more qualifying races before their medal race.

Snow-Hansen and Willcox started Sunday's racing third but struggled a little in their two races today, recording scores of 13 (their drop) and eight. They're still in the fight, however, sitting only five points behind third.

"It was a case of boxing gloves out and just taking a few too many jabs to the face today," Willcox said.

"It was a bit of a tough one for us today but the forecast is starkly different tomorrow and it's all to play for. The points are really close so it's all on."

Junior is likely to come out swinging in the Finn medal race.

He won the last qualifying race today, recovering from an eighth in his first race, and will go into the medal race eight points (or four boats) off third and one of only three Finn sailors to have won races at these Olympics.

Junior says it's felt like he's been battling throughout.

"I'm in with a shot but it's a lot of points, so I'll have to win the race and then cross my fingers that one of those in front of me finishes in the bottom half of the fleet."

Sam Meech went into today's Laser medal race with an outside chance, but things didn't go to plan and he finished 10th in that and 10th overall.

It's been a difficult regatta for the Rio bronze medallist, not least of all because he's been sailing with an infected knee.

"I'm pretty disappointed," he said. "I came in with pretty high expectations and felt pretty good but a lot of things didn't go right. It's been a bloody hard week."

The Nacra 17 pair of Micah Wilkinson and Erica Dawson finished 12th overall and will miss the medal race.

Burling and Tuke had a rest day on Sunday.