US gymnast Simone Biles is being praised for prioritising "mental wellness over all else" after pulling out of the Olympic women's team final. 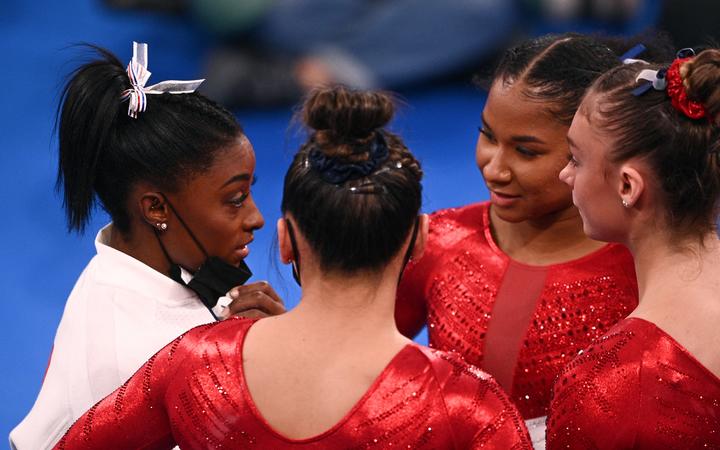 Simone Biles talks to her US team-mates after withdrawing from the teams artistic gymnastics at the Tokyo Olympics. Photo: AFP

The head of the US Olympic team, many gymnasts, and other sportspeople were among those to praise Biles' decision.

we love you and we are with you @Simone_Biles

The 24-year-old withdrew from the event after her vault, saying: "I have to focus on my mental health."

"You've made us so proud," said Sarah Hirshland, chief executive of the US Olympic and Paralympic Committee.

"We applaud your decision to prioritise your mental wellness over all else and offer you the full support and resources of our Team USA community as you navigate the journey ahead."

After scoring 13.766 - her lowest Olympic vault score - Biles left the arena, but returned to support her team-mates as they took silver behind the Russian Olympic Committee, with Great Britain claiming bronze.

Biles is a 30-time Olympic and World Championship medallist, and needs four podium finishes in Tokyo to become the most decorated gymnast - male or female - in history.

She is widely referred to as the 'GOAT' (Greatest Of All Time).

Jamaica gymnast Danusia Francis said: "Don't know about you but I think Simone Biles just empowered everyone to put their mental wellbeing above everything else. What a queen. GOAT in more ways than one."

Former Great Britain gymnast Beth Tweddle, a bronze medallist in 2012, said on BBC One: "Since 2013 she's been undefeated in the all-around so every competition she goes in, everyone expects her to be perfection, and it's just not possible.

"She was strong enough to say: 'I'm just not right today and I've got the belief in the rest of the girls. They know they can step up, that they can do their routines.'

"And she went back in, she was their chief cheerleader, and she was getting the chalk for them. That shows how much of a leader she is, to be able to make that decision.

"We have got to make sure that the health and wellbeing of every athlete is the main priority."

We love to see it. #GOAT #SimoneBiles pic.twitter.com/L0zulxS5Bz

France gymnast Melanie de Jesus dos Santos said: "We are not used to seeing Simone Biles like this. I would like to say that it is not easy because she is Simone Biles and everyone is watching her. It's so difficult psychologically for her."

Japan gymnast Mai Murakami added: "This is very unusual for her, but if you're under a lot of pressure it can affect your body."

Second place brought Biles her sixth Olympic medal, and she also won 19 world titles between 2013 and 2019.

She has reached all five individual finals in Tokyo and is undecided on whether she will compete in her next event on Thursday, when she will attempt to become the first woman to retain the Olympic all-around title since 1968.

Jordan Chiles, 20, replaced Biles in the women's team final, and said: "That was a huge thing. Those were definitely some big shoes that I had to fill and I'm very happy that I was able to do that.

"Yes, she is the GOAT. I was able to show the world that not only can you fill amazing people's shoes but we also did this together as well." 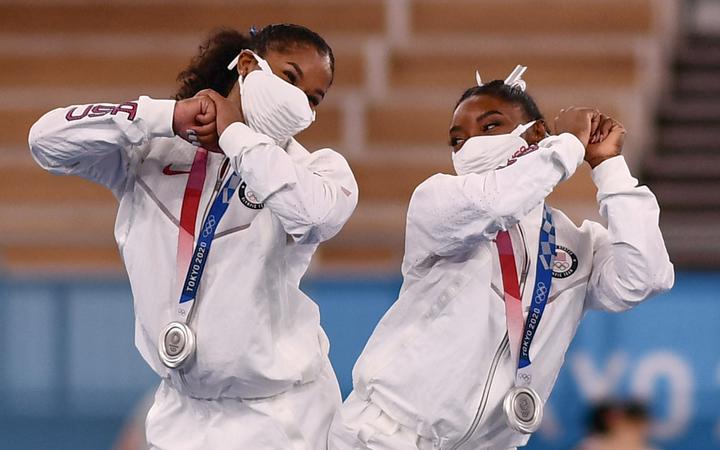 Jordan Chiles and Simone Biles on the podium after receiving their silver medals. Photo: AFP

Team-mate Sunisa Lee, 18, added: "We were all so stressed. We honestly didn't know in that moment. She's freaking Simone Biles. She carries the team basically.

"When we kind of had to step up to the plate and do what we had to do, it was very hard and stressful. But I'm very proud of us because we did that."

Former Olympic champion and retired US gymnast Aly Raisman said: "I feel sick to my stomach. It's horrible. I know that all of these athletes dream of this moment for their whole entire lives so I'm just completely devastated and just hoping Simone's OK.

"It's just so much pressure, and I've been watching how much pressure has been on her in the months leading up to the Games - and it's just devastating.

"Just a friendly reminder: Olympic athletes are human and they're doing the best they can. It's really hard to peak at the right moment and do the routine of your life under such pressure."

Messages of support for Biles also came from other athletes - and figures outside sport.

It takes the strength, power and bravery of a CHAMPION to put your health first. @Simone_Biles, we love you. Thank you ❤️ pic.twitter.com/wp6CJE4a4o

Black women are continuously shifting the narrative on what it means to be a "strong Black woman". To be strong is to thrive, and not suffer. There is strength in putting yourself first. Especially in these systems that do not serve us. Thank you @naomiosaka and @Simone_Biles.

Boxer Manny Pacquiao said "once a champion, always a champion", while US alpine skier and two-time Olympic gold medallist Mikaela Shiffrin added: "Keep whipping out that smile of yours cause it is undeniably golden."

Karl-Anthony Towns of NBA side Minnesota Timberwolves sent "nothing but love and positivity", while retired US figure skater Adam Rippon said: "I can't imagine the pressure Simone has been feeling. Sending her so much love. It's easy to forget she's still human."

Jen Psaki, the White House press secretary, said: "Gratitude and support are what Simone Biles deserves. Still the GOAT and we are all just lucky to be able to see her in action."

Unicef USA tweeted: "Thank you for being a role model and showing the world it's OK to prioritise your mental health."