Four-time Olympic gold medallist Simone Biles said "I have to focus on my mental health" after pulling out of the women's gymnastics team final. 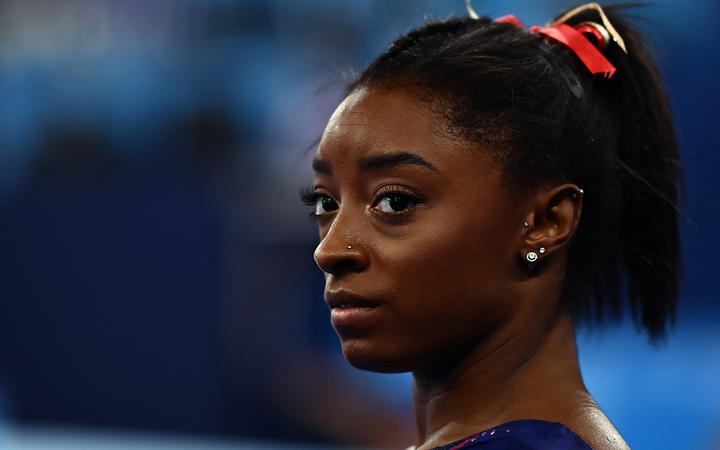 Announcing her decision to withdraw from the gymnastics team final, Biles said: "We have to protect our minds and our bodies and not just go out and do what the world wants us to do." Photo: AFP

The American left the arena after the vault, but later returned to support her team-mates as they claimed silver behind the Russian Olympic Committee.

Biles, 24, scored 13.766 - her lowest Olympic vault score - before withdrawing from the event.

"After the performance I did, I just didn't want to go on," she said.

"We have to protect our minds and our bodies and not just go out and do what the world wants us to do.

"I don't trust myself as much anymore. Maybe it's getting older. There were a couple of days when everybody tweets you and you feel the weight of the world.

"We're not just athletes. We're people at the end of the day and sometimes you just have to step back.

"I didn't want to go out and do something stupid and get hurt. ​I feel like a lot of athletes speaking up has really helped.

"It's so big, it's the Olympic Games. At the end of the day we don't want to be carried out of there on a stretcher."

In May, Japanese tennis player Naomi Osaka withdrew from the French Open to protect her mental health, a move publicly supported by several sportspeople including heptathlete Katarina Johnson-Thompson and basketball player Stephen Curry.

Biles is the most successful US gymnast of all time, and winner of four gold medals and a bronze at Rio 2016.

The 30-time Olympic and World Championship medallist needs four podium finishes in Tokyo to become the most decorated gymnast - male or female - in history.

She has reached all five individual finals and is undecided on whether she will compete in her next event on Thursday, when she will attempt to become the first woman to retain the Olympic all-around title since 1968.

Jordan Chiles stepped in to replace Biles and the United States were beaten to gold by the ROC, with Great Britain taking bronze.