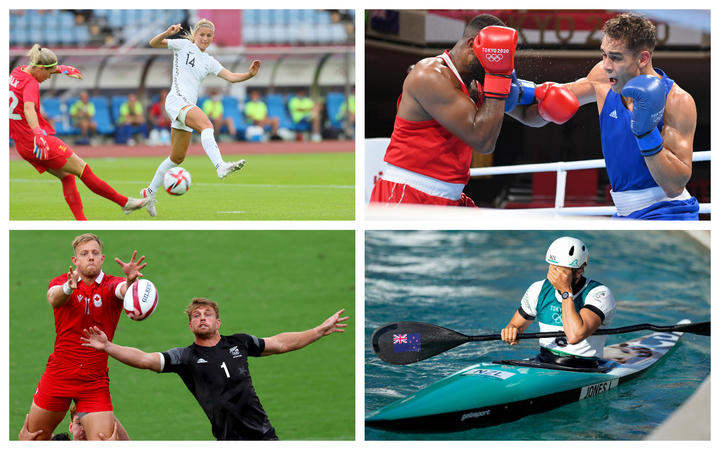 As well, the Football Ferns suffered a third straight loss, 0-2, at the hands of Sweden and their Olympic campaign has ended in disappointing style. The Ferns alongwith Australia were eliminated from a very strong group with Sweden and the USA advancing to the knockout rounds.

However, the men's sevens team has advanced to the semifinals tomorrow at 2pm after beating Canada 21-10 in tonight's quarter-final. The Kiwis will meet Great Britain, who came from behind to beat the USA 26-21 in another quarter-final.

In the canoeing 32-year-old Jones finished sixth, more than five seconds down on winner Ricarda Funk of Germany.

Jones didn't pick up any penalties, but lost her timing at a couple of gates and eventually clocked 110.67 seconds.

Defending Olympic champion Maialen Chourraut of Spain, who was seventh-fastest in the semifinal, produced a clear run of 106.63sec to take the silver medal.

Jones had qualified fifth fastest in the semifinal, picking up a two-second penalty to finish on 108.97sec.

She will compete in the C-1 Slalom heats tomorrow. 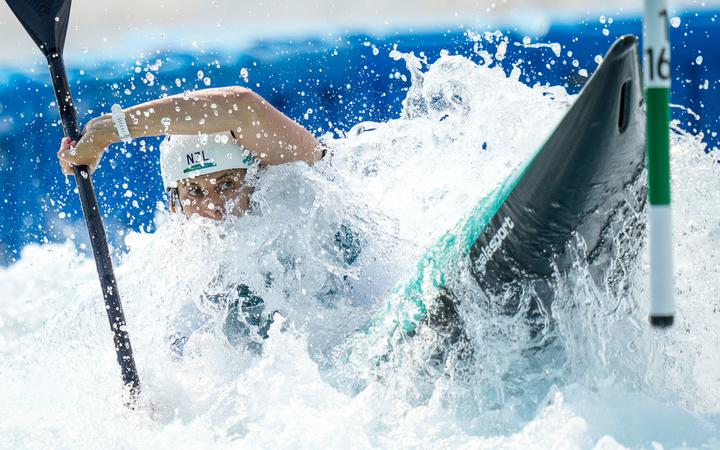 The men's sevens team are closing in on being a medal chance after a successful day that saw them emerge unbeaten from pool play and then post an impressive win over Canada in their quarterfinal.

There was to be no repeat at Tokyo Stadium of New Zealand's humiliating exit from the sevens in Rio.

Tries to Andrew Knewstubb and Scott Curry, who got two, ensured a 21-0 lead at the break, and while Canada replied with two tries in the second stanza the men in black always looked in control. 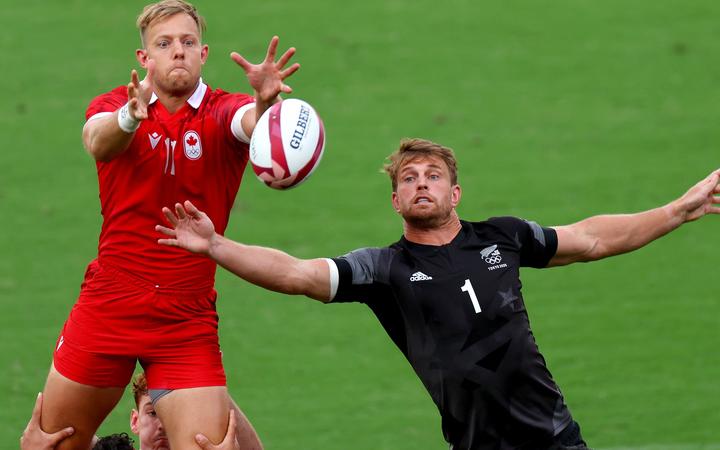 He outclassed his opponent who tried to bite him at one stage during the final round, which shocked Nyika.

"I didn't think he would get away with it. He tried to bite my cheek bone but luckily it was a little bit slippery. He probably got a mouthful of sweat - he also had his mouthguard in so no broken skin," Nyika told Sky Sport.

Nyika's coach, Billy Meehan, told Sky Sport that he'd been surprised to see Baalla's bite but said Nyika handled it well. His quarterfinal but will take place on Friday. 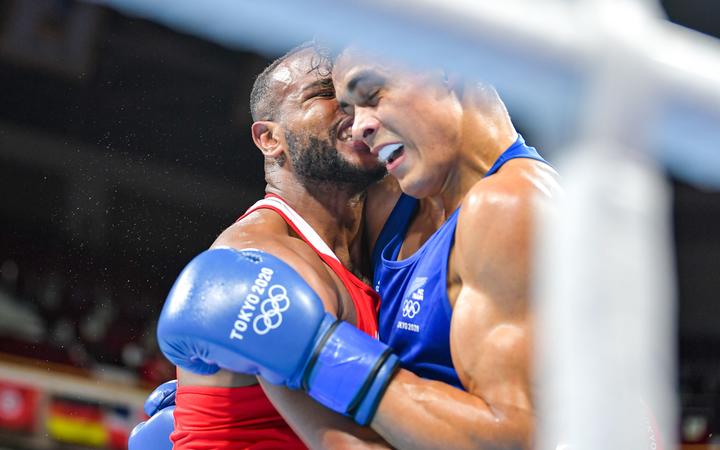 Rio silver medallists Alex Maloney and Molly Meech capsized in race one of the 49er FX class, then they were disqualified in race two before recording a welcome fifth in the third race that left them 13th overall.

In their only race Rio gold medallists Peter Burling and Blair Tuke finished 12th in the 49ers, Josh Junior was 12th and 10th in his Finn races and Sam Meech managed a 16th, a 14th and a third in the Laser class and now sits 15th overall and may find it difficult to make the final.

Ferreira recovered from breaking his board on the first wave to beat Japan's Kanoa Igarashi in the final, while Moore outclassed South African outsider Briana Buitendag to secure victory in the women's event.

Australia's Owen Wright took the men's bronze after a tense 35-minute battle with world number one Gabriel Medina, edging out the Brazilian by two-tenths of a point, while Japan's Amuro Tsuzuki beat 19-year-old American Caroline Marks to claim the women's bronze.

The final day of competition started with big, clean waves that delighted the competitors, but a strong onshore breeze picked up to make the swell choppier and more inconsistent with good waves harder to come by.

It made no difference to Ferreira and Moore as they went on the attack in pursuit of Olympic gold.

From the knee-high ripples of Sunday's opening rounds to Tuesday's roiling seas, it was a fitting way to crown surfing's Olympic debut as two of its boldest competitors were rewarded with a place in the history books.

Duffy, 33, stamped her authority on the race with a fantastic performance over the 10km run to finish in one hour, 53.36 minutes. 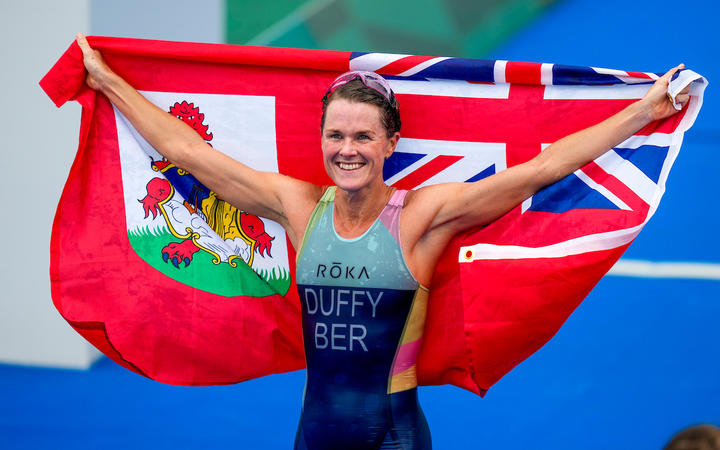 Briton Georgia Taylor-Brown overcame a flat tyre near the end of the bike leg to take silver, 74 seconds behind.

It was not such a good day for the New Zealand competitors. Ainslie Thorpe crashed on the bike in wet conditions and failed to resume, while fellow New Zealander Nicole van der Kaay finished 29th. 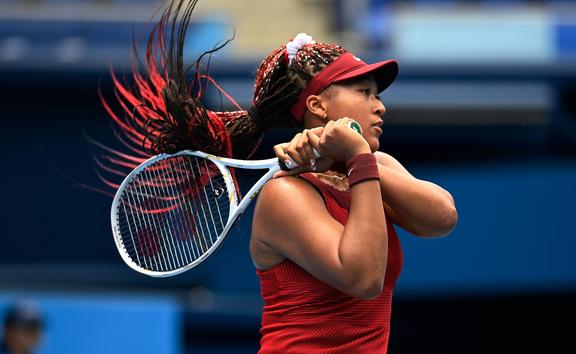 Japan's Naomi Osaka said she was happy with her experience at the Tokyo Games despite her stunning 6-1 6-4 loss to Marketa Vondrousova in the third round on Tuesday.

The 23-year-old world number two - one of the country's biggest medal hopes who just days earlier had lit the Olympic cauldron - acknowledged that she had been under pressure to perform.

However, she said she nonetheless satisfied with her maiden outing at the Games.

"For me, I'm really glad to be here. I'm sad that I lost of course, but all-in-all, really happy with my first Olympic experience," she told reporters after her match.