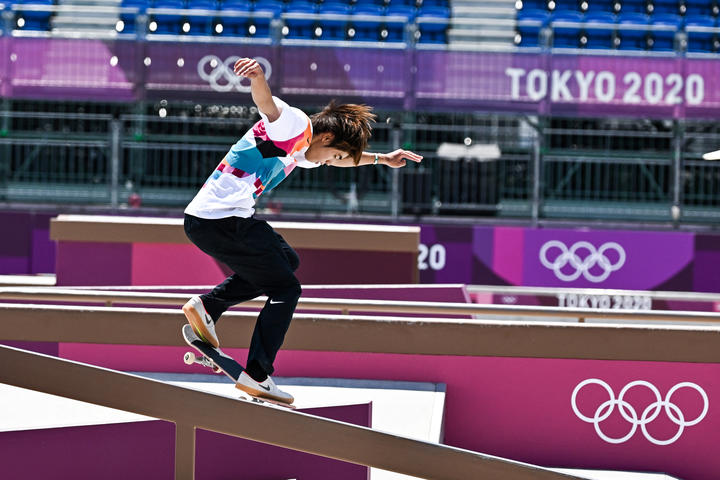 With many of his rivals taking tumbles, the world champion held his nerve to nail some scintillating tricks on the rails, stairs and benches that make up the street layout.

Horigome, who grew up in the same city ward where the skateboarding is taking place, raised the Japanese flag in celebration, delighting the small group of spectators inside Ariake Urban Sports Park.

Tokyo's enthusiasm for these Olympics has been slow to build, but Horigome's victory escalates excitement in Japan after golds for judoka Naohisa Takato on Saturday and swimmer Yui Ohashi on Sunday.

And what's more, Horigome achieved his feat by upsetting the sport's iconic figure and world number one Nyjah Huston, with the American stumbling in the intense heat and placing seventh out of eight.

"I know it's simple but I'm really happy," Horigome told Japanese broadcaster NHK. "I was stressing out inside, but I was able to turn it around with my best tricks."

I’m currently at the inaugural Olympic skateboarding event as The Faction’s “Skate and Destroy” plays over the loudspeakers. Welcome to our world.

Skateboarding is one of five new sports added for this Games, with the street course emulating the urban environment as tricks are performed on benches and rails.

Taking place in soaring temperatures in Tokyo's Koto City, 22-year-old Horigome struggled on his early runs but recovered his cool at the crucial time, landing four of the five final tricks and earning 9.50 on his penultimate run.

Skateboarding, with its roots in youth culture, has sometimes been frowned upon in Japan but watching the local hero prevail in a nail-biting final, that just might change.

The event moves on to the women's street on Monday, where Brazilian five-time X Games champion Leticia Bufoni will be one of the biggest names.

Sky Brown will make her Team GB debut, having barely turned 13, at the park event on 4 August.