The Black Caps are eyeing up a series win over England after dominating day three of the second test at Edgbaston. 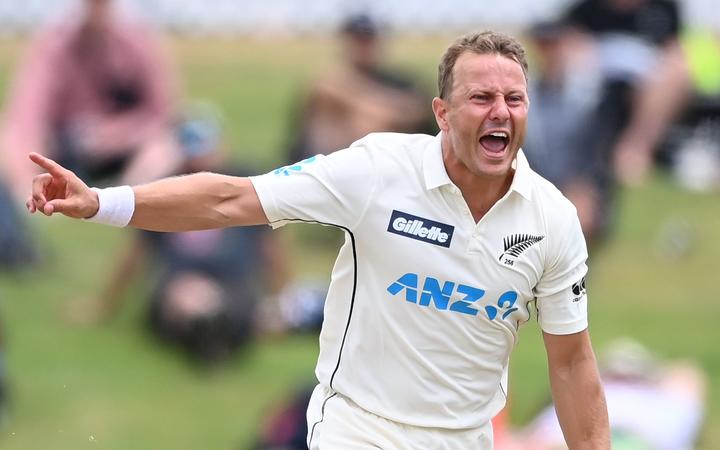 England have one wicket remaining and hold just a 37-run lead after the Black Caps bowlers tore through the hosts batting order.

England were then reduced to 76 for 7 in their second innings before the tail-enders got them through to 122 for 9 at stumps, with Matt Henry and Neil Wagner taking three wickets each for the Black Caps.

England had battled their way back into the contest on an entertaining day, taking the final seven New Zealand wickets for 96 runs to dismiss them for 388.

Faced with a first-innings deficit of 85, the hosts had the opportunity to set a challenging fourth-innings chase, only for their top order to disintegrate.

In the face of some superb New Zealand bowling, England found themselves 30-3 and 76-7, and eventually needed a stand of 44 between Olly Stone and Mark Wood to drag the game into a fourth day.

Still, barring something utterly remarkable, England will go down to their first home series defeat in seven years.

The Edgbaston crowd had not finished singing Jerusalem when the England slide began, Rory Burns loosely driving at Matt Henry's second ball of the innings to be caught at second slip.

With Henry holding a full length and nipping the ball, Dom Sibley edged to third slip before Zak Crawley was pinned by one that came back.

The bustling Neil Wagner took over, first trapping Ollie Pope on the crease for 23, then enticing Dan Lawrence into an edge behind.

In his third test innings, James Bracey was cheered when he registered his first run, only to be bowled around his legs sweeping at the left-arm spin of Ajaz Patel.

Captain Root dropped anchor in defiance, until even he nicked a cut at Patel to fall for 11 off 61 balls.

An example in defence came from Stone, while Wood swiped his way to 29 before he top-edged Wagner. There was still time for Broad to be bowled by Trent Boult.

New Zealand had the better of the drawn first test and, despite making six changes for the second, have given England a lesson in correct batting, length bowling and efficient catching.

From 229-3 overnight, they attacked the second new ball, Ross Taylor moving from 46 to 80 with some glorious drives.

He was dropped on 68 by diving sub fielder Sam Billings at long leg then, in the same over Taylor edged Stone to Bracey. The Gloucestershire wicketkeeper's difficult start to life in Test cricket continued when he put down Blundell.

Wood hit Henry Nicholls on the head, then had him caught down the leg side from the next ball, with England then running through the lower order after lunch.

Broad was the pick, ending with 4-48. When he trapped Patel lbw to end a chaotic last-wicket stand of 27 with Boult, there was genuine optimism England could create a competitive contest.

It evaporated almost as soon as they began batting.