The Black Caps lost a wicket just before stumps but they remain on the front foot after day two of the second test against England in Birmingham. 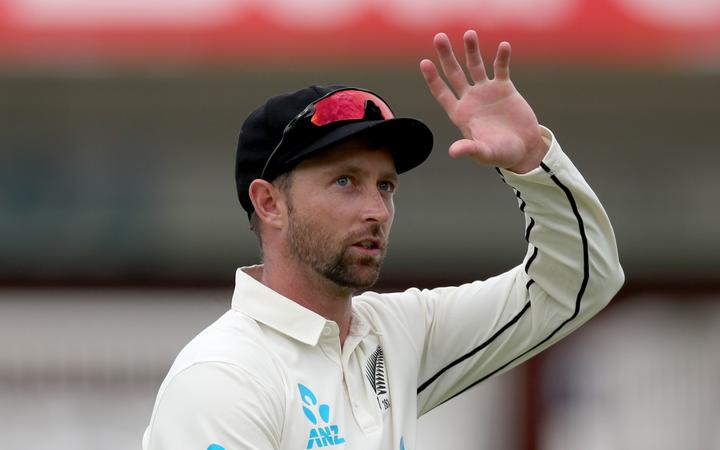 Devon Conway and Will Young scored half-centuries as New Zealand finished the day on 229-3, 74 runs behind England's first innings score in the second and deciding Test at Edgbaston.

Left-handed batsman Conway, fresh from his brilliant double hundred on debut at Lord's in the opening test, smashed 12 boundaries for his 80 and alongside Young added 122 runs for the second wicket.

Young showed incredible patience for his 82 off 204 balls before he became Dan Lawrence's maiden test wicket in the final over of the day. The tourists finished the day with Ross Taylor unbeaten on 46 at the other end.

"We won't get too far ahead of ourselves. We're still a fair few runs behind but the lads have done well this afternoon," New Zealand fast bowler Trent Boult said.

"It was a bit gutting to lose Will Young at the end there but he batted really well.

"This is a flat pitch. I'm not sure if it'll deteriorate. It's good to be batting now. I won't put a number on it but we need as many as possible."

New Zealand's stand-in skipper Tom Latham was trapped leg before with just 15 runs on the board before Conway and Will Young went on to frustrate the English bowling attack.

Conway was spared on 22 when the South African-born batsman edged seamer Stuart Broad to Zak Crawley in the slips.

But with on-field umpire Richard Kettleborough having made a soft signal of not out, TV umpire Michael Gough decided there was insufficient evidence for him to overturn that decision.

Young, who replaced injured skipper Kane Williamson in the top order, should have been certainly out for seven but England captain Joe Root dropped a seemingly comfortable chance at first slip despite getting both hands to the ball.

Conway missed out on another triple-figure score when he holed out to Broad in the final session, but Young continued to show great maturity at the other end.

Young, playing only his third test, built a 92-run partnership with Taylor as England struggled to make an impact without a full-time spinner in their lineup.

Earlier, tailender Mark Wood's flashy 41 helped England to 303 all out in their first innings, with Mark Lawrence finishing unbeaten on 81.

Wood, who resumed on 16 not out, scored six boundaries before edging a Matt Henry delivery back onto his stumps.

On his return to action, Trent Boult was the pick of the bowlers for the tourists as he trapped James Anderson leg before to finish with 4-85.

"The body is a little bit tiresome but it was great fun being out there," Boult said.

"I thought the boys did brilliantly yesterday - seven down after being on the wrong side of that coin. Now the game is nicely poised as we go into day three tomorrow."