The Highlanders thumped the ACT Brumbies 33-12 in Canberra to boost their chance of making the Super Rugby Trans-Tasman final after the Hurricanes kept their slim hopes alive with a record win over the Queensland Reds. 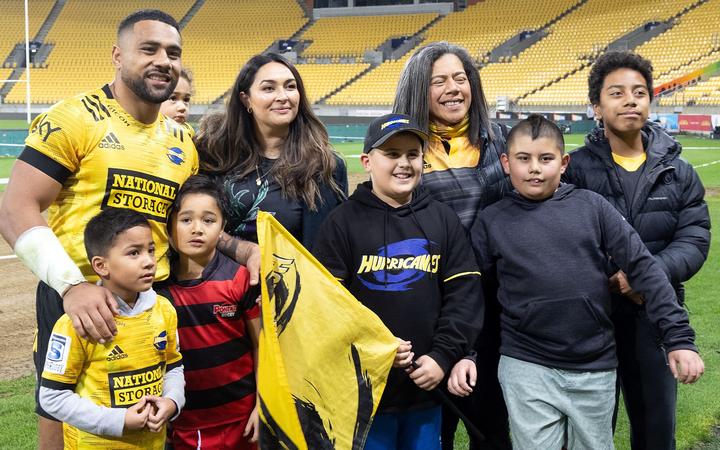 Ngani Lamuape with his family during the Super Rugby Trans-Tasman rugby match between the Hurricanes and Reds at Sky Stadium in Wellington. 11 June 2021 Photo: Photosport.NZwww.photosport.NZÂ© Photosport Ltd 2021

The Highlanders' bonus-point win at Canberra Stadium put them top of the table on 23 points, two points ahead of the second-placed Hurricanes, but both teams need results to go their way on Saturday.

The third-placed Blues (19 points) can claim the top spot and the right to host the final with victory at home to the Western Force but the equation is tougher for the fourth-placed Crusaders (18).

The Crusaders need to beat the Melbourne Rebels away on Saturday by at least three tries to claim a bonus point and have a winning margin of at least 33 points to snatch a place in the final.

Highlanders co-captain and Aaron Smith scored a try in each half in a typically industrious display by the All Blacks halfback, while Ash Dixon, Sio Tomkinson and Billy Harmon also crossed for the visitors.

"We've given ourselves our best shot to make this final," co-captain Smith said.

"I'm absolutely pumped. Over the moon, mate. Good luck to the Rebels."

The match was marred by the Highlanders wearing their alternative white kit which clashed with the home side's white shirts and appeared to confuse the players at times.

The already eliminated Brumbies, who trailed 14-12 at halftime but were kept scoreless after the break, bowed out meekly with a 1-4 losing record in the inaugural Trans-Tasman competition.

In the earlier match, All Blacks hooker Dane Coles grabbed a brace of tries in a 43-14 victory for the Hurricanes, who posted their biggest winning margin against the Reds.

Departing All Blacks centre Ngani Laumape scored the Hurricanes' opening try and had a hand in their second before exiting late to a big ovation from the home crowd.

The Reds, champions of the domestic Super Rugby AU competition, also finished Trans-Tasman with a 1-4 losing record, underlining the gap in class between the Australian and New Zealand teams.