The Tokyo Olympics are now just over two months away and calls to ditch the Games in the face of the pandemic are getting louder by the day. 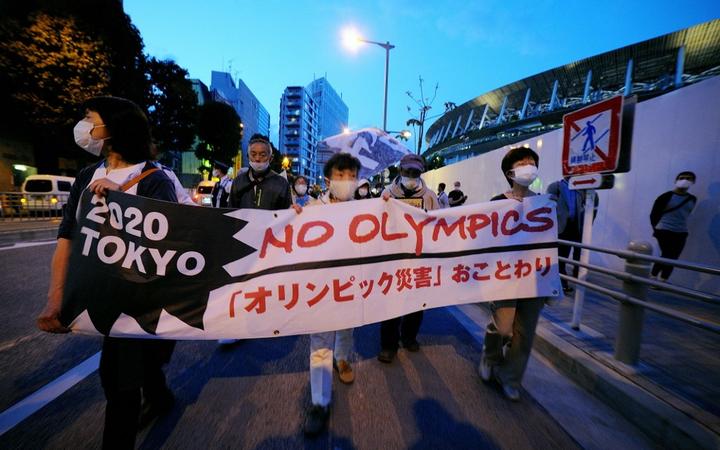 People stage a demonstration in Tokyo this week, demanding the Olympics be cancelled due to the coronavirus pandemic. Photo: AFP

So why isn't Japan talking about cancelling the Games? The answer as it turns out, is not that simple.

The situation is not looking great in Japan.

A coronavirus state of emergency has been extended in the capital, Tokyo, and three other major prefectures as cases continue to rise.

Yet there's been no word about cancelling the Games, despite both health experts and public opinion being stacked against them.

Current polls in Japan show nearly 70 percent of the population do not want the Olympics to go ahead, but the International Olympic Committee (IOC) remains steadfast that the spectacle will take place.

Japan has long insisted there was no question the Olympics, which should have taken place last summer, would be held and will be safe.

Yet earlier this week, Prime Minister Yoshihide Suga for the first time appeared to bow to the pressure of public opinion, saying that the government would "not put the Olympics first" - but adding that ultimately, the decision would lie with the IOC.

The contract between the IOC and host city Tokyo is straightforward: There's one article regarding cancellation and it only gives the option for the IOC to cancel, not for the host city.

That's because the Olympic Games are the "exclusive property" of the IOC, international sports lawyer Alexandre Miguel Mestre said. And as the "owner" of the Games, it is the IOC that can terminate the contract.

One reason given to justify a cancellation - aside from things like war or civil disorder - is that if "the IOC has reasonable grounds to believe, in its sole discretion, that the safety of participants in the Games would be seriously threatened or jeopardised for any reason whatsoever". Arguably, the pandemic could be seen as such a threat.

The Olympic charter also stipulates that the IOC should ensure "the health of the athletes" and promote "safe sports", Mestre said, but despite all this, the IOC seems determined to go ahead. 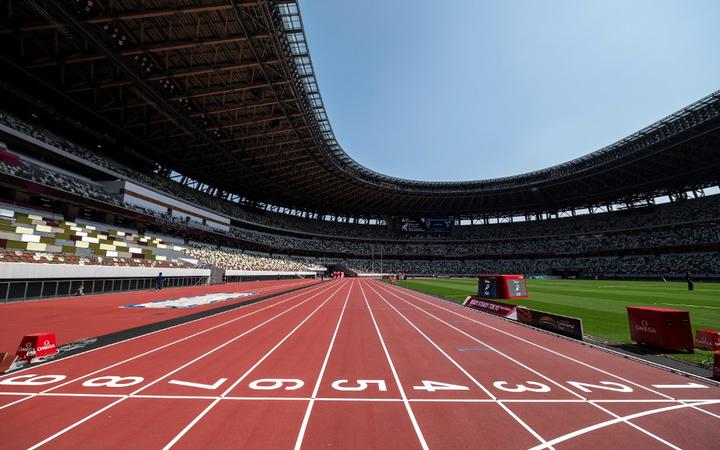 The National Stadium in Tokyo - one of the main venues for the Olympics and Paralympics. Photo: AFP

So could Japan go against the IOC and pull out itself?

"Under various clauses within this host city agreement, if Japan was to unilaterally cancel the contract, then by and large, the risks and losses would fall with the local organising committee," Professor Jack Anderson at the University of Melbourne said.

The sports law expert said that the contract is fairly typical and that of course Tokyo knew what it signed up to. What it didn't know was that a global pandemic would enter the picture.

"Contracts can foresee certain contingencies, but the nature of the current situation is obviously unprecedented," he said.

"The Olympics are the biggest sporting event on the calendar, there are billions at stake for Japan and also the IOC in terms of broadcasting sponsorship. It is a huge event and there are huge contractual obligations for all sides."

Hence, the only realistic scenario is Japan pulling the plug jointly with the IOC, staying within the framework of their contract.

If that happens, that's where insurances would come in: The IOC has insurance, the local organising committee has insurance and the various broadcasters and sponsors will also have insurance.

"It's probably safe to say that if the Tokyo Olympics is cancelled, it would probably be the biggest insurance payout event of its kind, there's no question about that," Prof Anderson said.

Insurance would cover the concrete expenses by the organisers, but it would hardly cover all of the indirect cost raked up by investments across the country in anticipation of the spectacle - hotels and restaurants for example, that might have undergone renovations in preparations for tourists they thought they would receive.

It's been a rocky road - they were postponed from last year, the torch run has been disrupted, international fans won't be allowed to come and now even competitions in empty stadiums are on the cards. 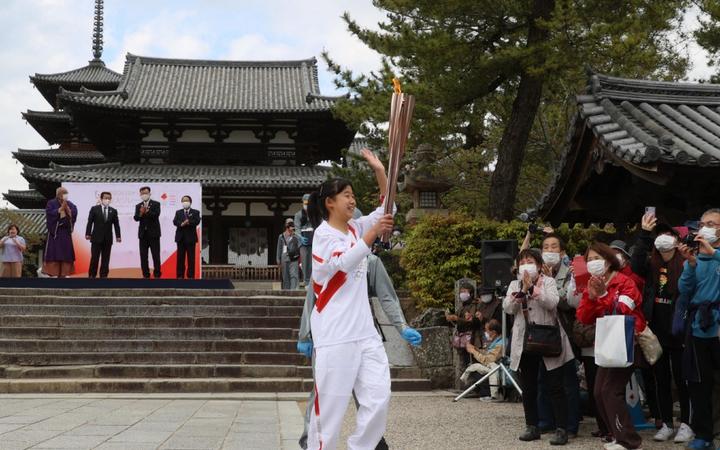 The traditional torch relay has been disrupted several times due to the Covid-19 pandemic. Photo: AFP

Few athletes have spoken out about the issue and they are likely torn over the issue. For those who make it, the Olympics are what they have trained for for years.

At the same time, there's the concern for personal and public health in the middle of a global pandemic.

Japan's biggest sports star, tennis champion Naomi Osaka was one of the few to join the debate, but also only voiced cautious hesitation.

"Of course I want the Olympics to happen," she said this week. "But I think there's so much important stuff going on, especially the past year.

"For me, I feel like if it's putting people at risk... then it definitely should be a discussion, which I think it is as of right now. At the end of the day, I'm just an athlete, and there is a whole pandemic going on." 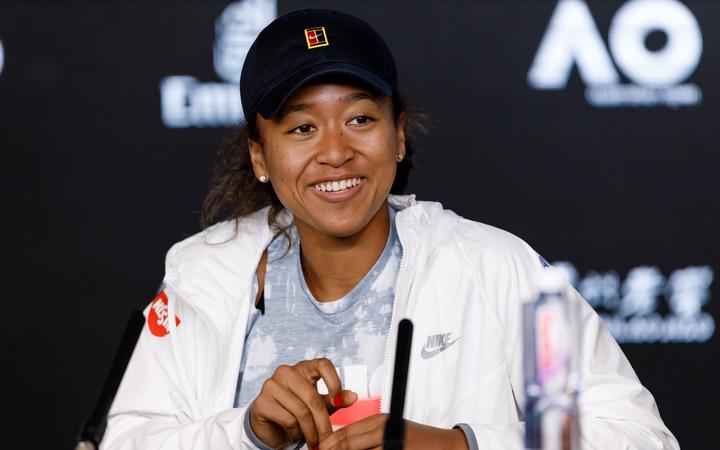 Naomi Osaka is one of the few athletes who has voiced an opinion on the Olympic Games going ahead in July. Photo: PHOTOSPORT

The US track and field team earlier this week cancelled its pre-Olympics training camp in Japan out of safety concerns. And even the governor of the province that would have hosted the team, said he believed "they made the best decision possible in the current situation".

The same uncertainty trickles through from many of those involved in organising the Games.

Several of the towns which were set to host the athletes across the Tokyo region have reportedly pulled out for fear the programme might add to the spread of Covid-19.

A doctors union this week said in a statement to the government that it was "impossible" to hold the Games given the development of the pandemic.

None of these things are clear-cut calls for the Games to be cancelled, but with the warnings by health experts and public opinion turning against the games, the trickle of doubters is becoming a steady chorus over the past weeks.

There is more at stake though than just the financial cost of cancelling the Olympics.

The next Games on the global calendar are already next year, the Winter Games in February 2022, hosted by regional rival China in Beijing.

So there is little doubt that overall, Japan is prepared to go to great lengths to get the Tokyo Games done.

The last time Japan hosted a Summer Olympics was in 1964 and at the time, they were seen as an important symbol for the country's rehabilitation and rebuilding process after World War II.

"Japan has seen economic stagnation for a long time, there has been the tsunami and the nuclear disaster of Fukushima, so the Games would be seen as symbolic of a revival of Japan," he says. "It does take a special importance in that sense."

Ultimately, the question of whether the Games should go ahead is separate from whether they will go ahead. In the history of the modern Olympics, there have been only three instances the spectacle has been cancelled: in 1916, 1940 and 1944 - all three cases due to the two World Wars.

So despite mounting headwinds, the IOC's refusal to even consider a cancellation has most observers agreeing that the Olympics will go ahead from 23 July - in what shape or form still remains unclear.