When new Waikato Bay of Plenty Magic shooter Chiara Semple steps on court and makes eye contact with her family and friends in the crowd, she's making up for lost time. 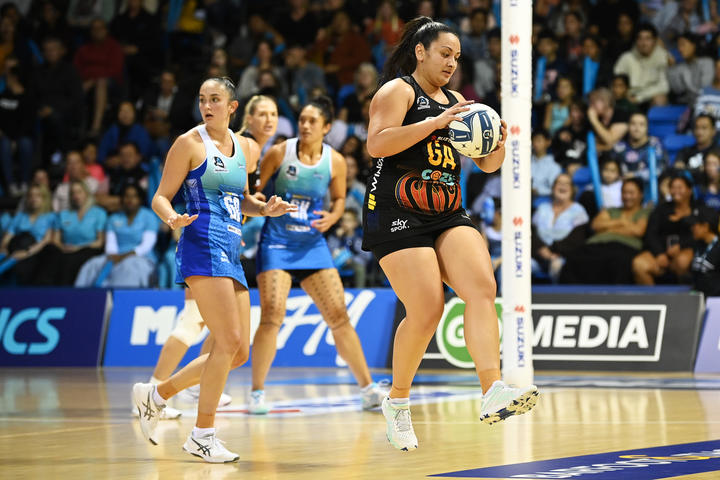 Semple (Ngāpuhi) had only just turned 19 when she headed over to the United Kingdom five years' ago in search of opportunities.

"I wasn't getting selected or looked at, at all by any ANZ teams and I got dropped from the New Zealand Under 21s.

"So my old school coach, she was coaching a team over there and asked me if I wanted to go with her, get some court time and experience so my parents just pushed me to do it," Semple said.

That coach was no other than Te Aroha Keenan, who had huge success as head of netball at Mount Albert Grammar School.

Keenan took MAGS to their fourth consecutive NZ Secondary Schools Netball Champs title in 2015 before heading to the UK to coach Team Northumbria in the UK Superleague.

At MAGS Semple was team-mates with the likes of Silver Ferns' shooter Maia Wilson and defender Holly Fowler, who both got ANZ Premiership contracts straight out of school in 2016.

Semple's final year at MAGS was in 2014, but no ANZ contracts were on offer and it was back when there was no feeder league and she was on the verge of quitting netball.

Apart from Keenan, Semple didn't know anyone over in the UK and battled homesickness early on.

"I think the first season, some days I would just cry. Just going into my games and not seeing any family members at all or anyone I really knew in the crowd was quite sad especially being so young, fresh out of school but after the first year I got used to it."

Semple played for Team Northumbria for three years before moving to the London Pulse.

"I was also working part-time because the money's not as good as over here. I had to work at a school as like a netball coach slash sort of PE teacher to earn extra money for myself."

Strong performances with Northumbria earned her selection in England's U21 team for the 2017 World Youth Cup in Botswana.

"It was a good experience to be in the England system, it was really different compared to the New Zealand style of play which was really good to learn."

The 24-year-old said when the England Roses won the Commonwealth Games gold in 2018, it had a huge impact on netball in the UK.

"The fact that most of the games are televised now, when I first went there, I think there was only one or two games that were televised."

Having family and friends in the crowd is something that most ANZ Premiership players probably take for granted, but not Semple.

"One year my Dad came over to the UK. I think in my second season he came over to watch but everything else was following my team twitter pages for live updates that's all basically."

When the UK Superleague got suspended after three rounds last year Semple decided to come back to New Zealand to have some family time, while the Covid situation was getting worse in the UK.

The UK league was subsequently cancelled and Semple, while she had to take the long route, got her first ANZ Premiership contract with the Waikato Bay of Plenty Magic.

While she had some tough times, Semple said going over to the UK was a good career move.

"I was able to get court time, I was thinking about quitting netball before I went over so it was a good experience to do what I did and then come back here obviously it was for a pandemic ...I came back to New Zealand literally a day before level four lockdown last year. But now that I'm in the ANZ it's surreal timing."

She never imagined in her wildest dreams she would one day become the team-mate of Australian Diamond stalwart Caitlin Bassett.

"Especially my first year in ANZ, I'd never thought, the former Aussie captain, I'd be feeding her or shooting beside her."

Semple has noticed a definite step up in intensity in New Zealand.

"It's a way bigger step up over here, even the pre-season I just went through was way harder, it's the hardest I've ever been through. I think it's a bigger step up because there's not just a starting seven in every team, everyone's fighting for a spot, it can change any week. And it's more physical as well definitely."

Semple has played well in her first three rounds of ANZ netball, impressing with her calmness and long-range shooting. She wants to keep building her game but there's something else she's also savouring.

"Most importantly playing in front of my family and friends, which is really cool."