The Chiefs have edged the Crusaders 26-25 in a bruising Super Rugby Aotearoa clash in Hamilton tonight, extending their winning streak to four games and edging into second place on the ladder. 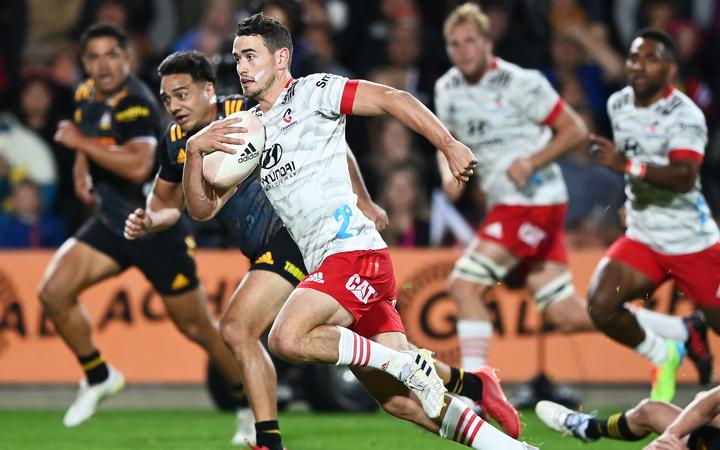 Both teams won golden point matches last week, but tonight it was the kicking of Damian McKenzie - both tactically and from the tee - which proved decisive.

He nailed four penalties and two conversions in a faultless performance to edge the Chiefs ahead in a see-sawing second half.

The Crusaders had started strongly, scoring after seven minutes as they built phases and closed in on the line with strong running through the midfield.

Richie Mo'unga's conversion made it 7-0, although three McKenzie penalties gave the Chiefs a brief 9-7 lead 15 minutes out from half-time.

The advantage was short lived, Crusaders skipper Scott Barrett storming up the middle from a Mo'unga offload before sending fullback Will Jordan away for the try.

The defending champions took a 17-9 lead into the main break, but the Chiefs hit back three minutes after the restart with a try to flanker Lachlan Boshier in a move kick-started by Alex Nankivell's break.

McKenzie's conversion took the Chiefs to within one point, only for Crusaders hooker Codie Taylor to restore a more comfortable margin for the visitors with his 53rd minute try.

Chiefs winger Jonah Lowe scored out wide in the 61st minute, and McKenzie slotted a tricky conversion to give the home team a 23-22 lead which lasted only four minutes before Richie Mo'unga slotted his second penalty of the night.

But McKenzie had the final say, his final penalty two minutes from the final whistle securing a hard-earned win.