In November, Fijian Drua and Moana Pasifika were announced as New Zealand Rugby's preferred partners to join an expanded 12-team competition subject to a range of conditions, mostly financial, to show that they were capable of funding each franchise to the tune of $10 million a year.

Sir Michael, who is also a former Manu Samoa and All Blacks legend, said the time for such a competition was now.

"We go with a great amount of passion and confidence into the future. These become pathways for young aspiring Pacific men and eventually, we believe, hopefully, a women's programme." 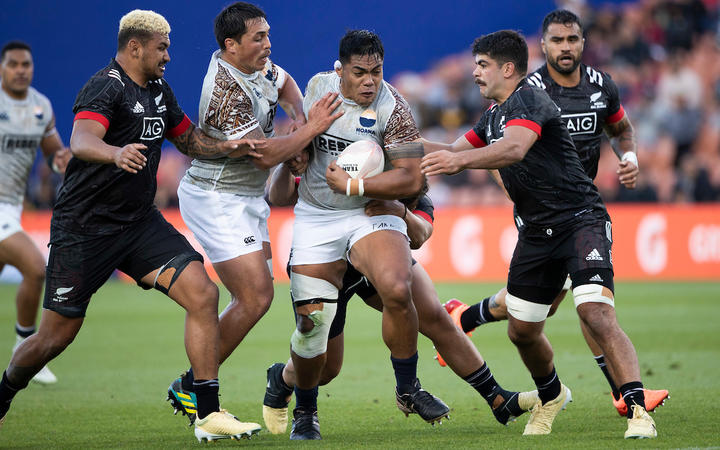 Moana Pasifika in action against the Māori All Blacks in 2020. Photo: Photosport Ltd 2020 www.photosport.nz

"If we extend the access of more young men and women into our game, we've got to believe that there's going to be a higher peak and greater outcome along the way."

He recalled how Samoa and Fiji have ranked in the top eight about a decade ago, but there wasn't much involvement in mainstream competitions and "the standard has gradually dropped".

He said players not allowed to compete in mainstream tournaments led to the "degradation of the game".

"It should have happened 25 years ago," Sir Bryan said.

"NZR has taken a very bold step. With Super Rugby previously I was involved with coaching the Hurricanes about 20 years ago and the travel factor in Super Rugby is just debilitating, very costly as well. So a lot of thought has gone into how this competition can be structured to make sure it is not too costly and including the Pacific islands. It's great.

Sakalia, who is also chief executive of Pacific Business Trust, started tearing up and said it had been a tough journey of disagreements and challenges.

"The empowerment model is something that Moana Pasifika and Fiji will embrace. We have the people, we've got the numbers and more importantly, we've got the diverse skill sets that you need to make this a reality."

He said there was plenty of talent among Pasifika players but there was a need to "harness our people, our culture, our stories and blend it with the commercial business skills that we need to succeed as a professional organisation but then also attract the right people to coach and manage".

NZR chief executive Mark Robinson said business plans were being finalised and there were ongoing talks with Rugby Australia.

"The tour is symbolic of the genuine interest in this, in the sense we are on the frontier of something extremely exciting for our competitions going forward that will elevate this competition more than just about rugby, it will be about the way we bring different communities and cultures to life and together."

He said it served NZR's motto of "the rugby way".

There was a commitment to quality, he said, so teams coming had to be "sustainable and commercially viable, and they have to play in extremely high level and be highly competitive".

In a written statement Fiji Rugby Union Chair Conway Begg, who was in Fiji and unable to attend in person due to Covid-19 travel restrictions, added: "This is a big moment for the Drua and will provide the impetus for us to finalise our equity partners, appoint coaches, contract players and confirm our commercial partners. We are on the home stretch and excitement is building across Fiji."