The Crusaders have won the second golden-point Super Rugby Aotearoa match this weekend, with a 30-27 victory over the Hurricanes in Wellington. 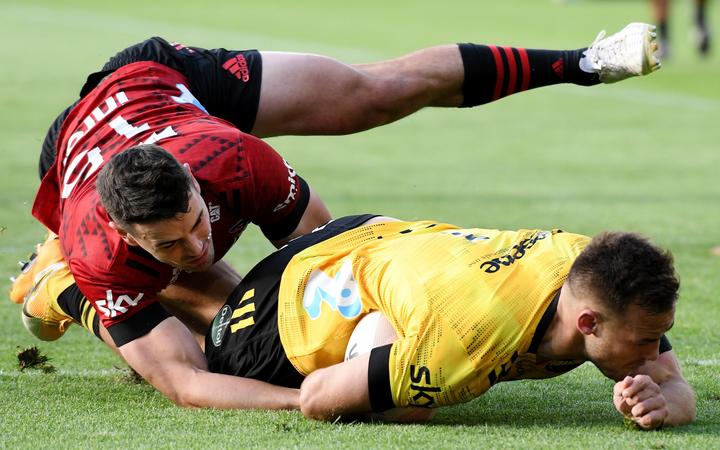 The scores were level 17-17 at halftime and 27-27 after 80 minutes, both teams each scoring three tries.

The match then went to 10 minutes of extra time, with the win going to the first team to score.

That was the Crusaders, second five-eighth David Havili capitalising on a charge-down to sink a dropped goal after barely a minute.

Last night's game between the Chiefs and Highlanders in Dunedin also went to golden point, Damain McKenzie kicking the match-winning penalty for the visitors.

The Crusaders - upset 33-12 by the Highlanders last week - started strongly in Wellington this afternoon, two George Bridge tries pushing them out to a 14-3 lead after 25 minutes.

The losses of Jack Goodhue and Joe Moody, in his 100th game, to injury didn't help the Crusaders cause, and the Hurricanes hit back with tries to Ngani Laumape and Julian Savea inside three minutes.

But the home team were on the back foot in the second half, down to 14 men after Laumape was yellow-carded in the closing seconds of the first spell for dropping an elbow on Crusaders skipper Scott Barrett in the tackle.

However, winger Wes Goosen scored after just three minutes to snatch the lead back for the Hurricanes, only for

The golden point decider was brought into Super Rugby Aotearoa last season, but hadn't been needed until this weekend.