The White Ferns have fallen to another convincing loss in game two of their one-day international series against England. 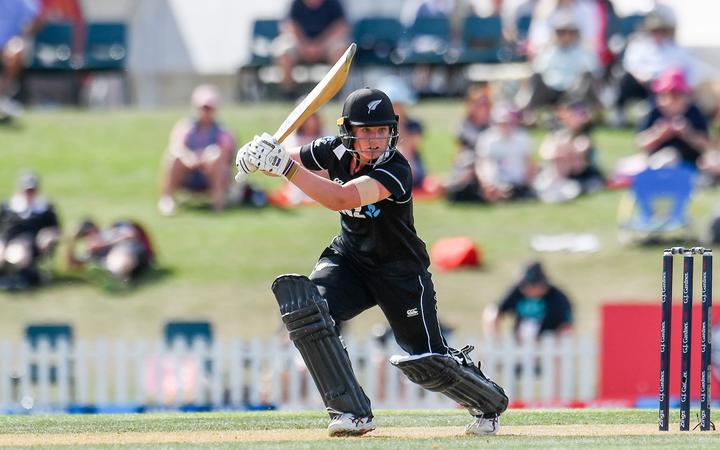 New Zealand suffered a seven-wicket defeat in Dunedin on Friday, the visitors wrapping up the three-match series by reaching their target of 193 with more than 12 overs to spare.

England's chase was led by a steady 72 not out to opener Tammy Beaumont, while Nat Sciver (63) and Amy Jones (46) made more brisk contributions.

It came after the reigning 50-over fortmat world champions also won Tuesday's series opener in Christchurch, by eight wickets.

Earlier, newcomer Brooke Halliday was again a shining light for the home side.

Following on from her 50 on international debut on Tuesday, the left-hander became just the fifth player in the women's game to score back-to-back half centuries.

However, it came after the White Ferns had not been withstand the England bowlers' early onslaught, losing four wickets in the first eight overs of the match.

Opening bowlers Sciver (3-26) and Katherine Brunt (2-34) were given extended spells as they kept the New Zealand run-rate down.

The first meaningful partnership for New Zealand came for the sixth wicket between Katey Martin, playing her first international game on her home oval, and Halliday.

The pair put on 42 runs before Martin was dismissed for 17.

Halliday pushed on with her club team-mate Maddy Green for a 48-run partnership. But when Green was run out for 14, Halliday did not last much longer before she was out caught behind for 60.

The White Ferns' lower order bolstered the score with Hannah Rowe (29) and Jess Kerr (28) letting loose to accumulate the highest partnership of the innings of 53 runs.

The final ODI of the series was on Sunday in Dunedin, before the teams switched format for three T20s starting on 3 March.