Opinion - Something has to be done for the Black Ferns Sevens team. 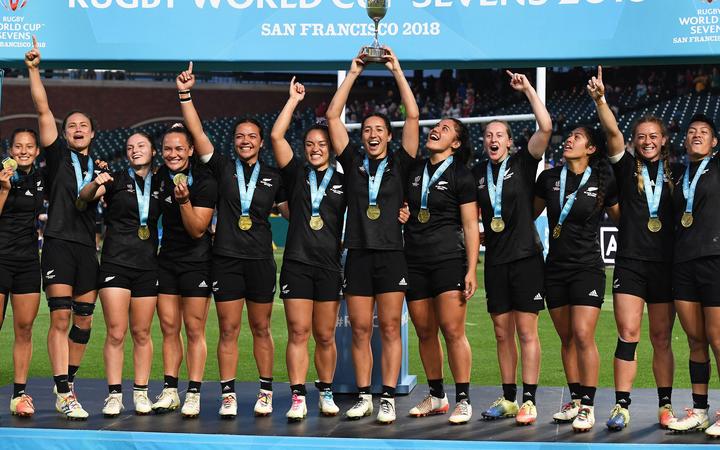 The good intentions and worthy gestures are no longer sufficient. It's not enough to use Black Ferns as on-air TV talent or to garland the team with awards.

Plenty of people are happy to cloak themselves in the deeds of this sevens side. They're happy to say how much they admire and respect them and to profess their fandom, but what are they actually doing to ensure the Black Ferns Sevens remain a going concern?

Sevens, as it stands, has ceased to be a sport. The world circuit has disappeared and it's hard to see how it will return anytime soon.

Only there is - at least in theory - an Olympic Games to be contested this year.

Since Rio 2016, when the Black Ferns watched Australia walk away with the gold medal, they have dominated the sport in a fashion rarely seen by any team in any code.

No-one is entitled to success, but few people who've watched these Black Ferns in the intervening years would say they haven't had gold-medallists written all over them.

The All Blacks don't have a Rugby World Cup in 2021. They're not going for 15 a-side gold in Tokyo, assuming those Olympics actually go ahead.

And yet their test schedule has been set. As has that for Super Rugby - both domestic and trans-Tasman - and plenty of thought is going into what to do with the Mitre 10 Cup.

If New Zealand Rugby (NZR) and their broadcast partners are lukewarm about the Black Ferns Sevens, they should say so. If the team are not a priority, then just come out and admit it.

But they don't do that, do they? No. They make the Black Ferns Sevens team of the year again and use players as expert analysts on TV.

They give - to most intents and purposes - the distinct impression that these women matter. The missing ingredient, sadly, is some action.

Unlike with the blokes' 15s, there's no bubbles or teams in quarantine scheduled. The Hamilton Sevens has been cancelled and there's no confirmed Olympic build-up to speak of.

We'll move heaven and earth to get the meaningless Rugby Championship held, but what are we actually doing for our women's sevens players?

Again, it wouldn't matter or be so insulting if all and sundry didn't pretend they cared about the team so much. But it's not enough to just profess your admiration for these players and to say you champion equality and diversity if those words are not backed by actions.

Covid-19 has been hugely disruptive to world sport, but if Netball New Zealand could get England in and out of the country for a three-test series a few months back, why can't NZR summon a few female sevens teams here?

New Zealand had hoped to host the men's 15 a-side men's teams from South Africa, Argentina and Australia last year. Instead the All Blacks ended up in Australia.

Staging any women's international rugby was all too hard, though. Or more likely too irrelevant.

We all get that returns for investment are scant with women's sevens. For all the Black Ferns' many achievements and the brilliance of the players, they're yet to become a commercial success.

And nor will they if they never actually play.

If you're going to stage an Ignite7s, for instance, then promote the heck out of it. I mean who actually knew that was on, beyond a few Mount Maunganui locals?

There is a connection between the Black Ferns Sevens team and this country. The 2018 Commonwealth Games triumph, among other things, has seen to that.

So let's get them on the park. Let's have them playing and training in front of Kiwi fans. Let's give them someone to actually play, rather than just another meaningless award.

Let's give these women more than just a stint behind a microphone. Let's put them where they really shine - on the field, against elite opposition - and see if that can generate a few bucks.

It's March since Covid-19 reached global pandemic status and still next to nothing has occurred or been confirmed to keep the Black Ferns Sevens in action.

If this team, and Olympic success, truly matter, then that situation needs to change fast.