After what seems like a veritable lifetime, Aotearoa's most outspoken sportsman will find himself back on the job tomorrow in Abu Dhabi as part of the main event of UFC 253. 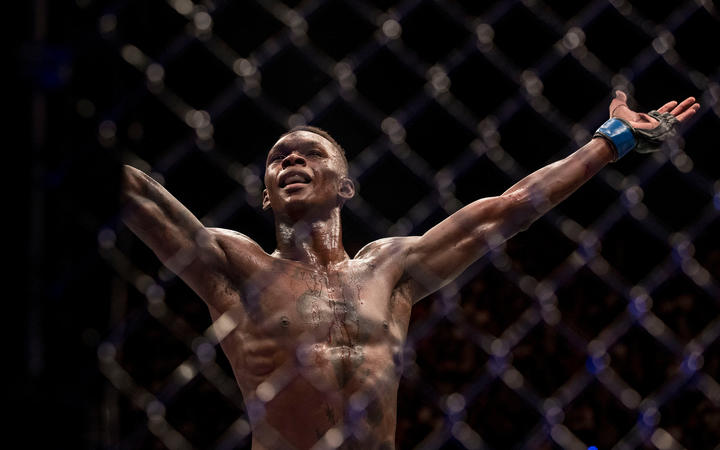 Israel Adesanya hasn't thrown a punch in anger since 7 March - that's before lockdown for anyone whose memory can currently go back that far - but will hopefully be landing a fair few on Brazlian Paulo Costa.

The two men will go into the fight (scheduled for late afternoon NZT, but a 5-6am start local time due to there being no crowd and therefore free to organise around the best slot for an American TV audience), which is for Adesanya's middleweight world title, with the rarest of addendums in mixed martial arts.

Both have unblemished records, with Adesanya sitting at 19-0 and Costa 13-0, a statistic more at home in boxing.

To put it into context, the sport's biggest draw of all time, Conor McGregor, has a 22-4 record including a loss in only his third professional fight.

However, there's nothing rare about the amount of trash talk that's being flung back and forth in the lead up.

Costa, in true combat sport style, sent a foul-mouthed tirade at Adesanya on Twitter back in June that can't possibly be put in print here.

Unfortunately, his command of English clearly needs some work, and signed off the tweet as the self-appointed 'King of B*tches'.

This is on top of Costa being in constant strife over drug tests, with his team doctor receiving a two year ban for illegally administering intravenous drips before a fight and Adesanya saying that his opponent is 'juiced to the f**king gills'.

Again, this is nothing new.

New Zealand's other main UFC star, Mark Hunt, has fought a long and lengthy battle with the promotion over what he perceives to be endemic performancing enhancing drug use.

Given the grotesquely oversized bulk of his most high profile opponent, Brock Lesnar in 2016, it's hard not to believe him - especially when the result of that fight was overturned after Lesnar tested positive for clomephine (an estrogen suppressant usually used for treating female infertility).

But while Costa's jawing and questionable training methods are giving the fight an edge, they aren't the whole reason why fight fans in New Zealand are tuning in.

Adesanya's last win, against another blaspheming Brazilian, Yoel Romero, was slammed for its lack of aesthetic quality.

The plodding nature of the fight, especially the action free first two rounds, was in stark contrast to Adesanya's stunning displays against Kelvin Gastelum and Robert Whittaker last year that set up and won him the middleweight title respectively, so this fight is being seen as somewhat of a hopeful return to form.

That hasn't kept Adesanya quiet in the meantime, though.

On the back of winning the Halberg Award for Sportsman of the Year back in February, after which he delivered a blistering speech on what it means to be a Nigerian-born kiwi representing his country, Adesanya has unsurprisingly thrown his support behind the Black Lives Matter movement and the upcoming 'yes' vote on the cannabis referendum.

That and simply saying whatever he likes, whenever he wants.

That makes him almost one of a kind in New Zealand sport. His Halberg speech stood in stark contrast to the almost pitiful acceptance words of an extremely unprepared Silver Ferns team, who had the limelight of what was a multiple award night for them swiftly shifted to the confident and self assured Adesanya.

The fighter's further claim that he is 'bigger than the All Blacks', an almost heretical statement in New Zealand sport, has almost been grudgingly adhered to by most given that his social media numbers do actually back that up.

That and the undeniable fact that he is undeniably more interesting - although this is an extremely low bar to clear, given that few weeks ago in Wellington it was like drawing blood from a stone asking a couple of players if they wanted to make the North v South game an annual fixture, never mind what they think of Jacinda Ardern.

One of the biggest fights in middleweight history!

None of that matters once the bell rings, though. This is the fight game.

While a loss won't kill any careers, it will mean someone is going to have to eat their words - in Costa's case it'll be a mangled load of bad translations, and it will be interesting to see if he sticks to his hilarious self-own of a nickname.

New Zealand is well represented on the card with Shane Young, Brad Ridell and Kai Kara France all heading into battle as well on another red letter day for the prolific coach Eugene Bareman and his City Kickboxing stable, so there is plenty to keep an eye on at UFC 253.

* Follow all of the action with a live blog by Jamie Wall at rnz.co.nz tomorrow afternoon.