Injury cut short two-time Olympian Kim Mickle's footy career in Freemantle but a switch to coaching in Christchurch made her an instant winner. 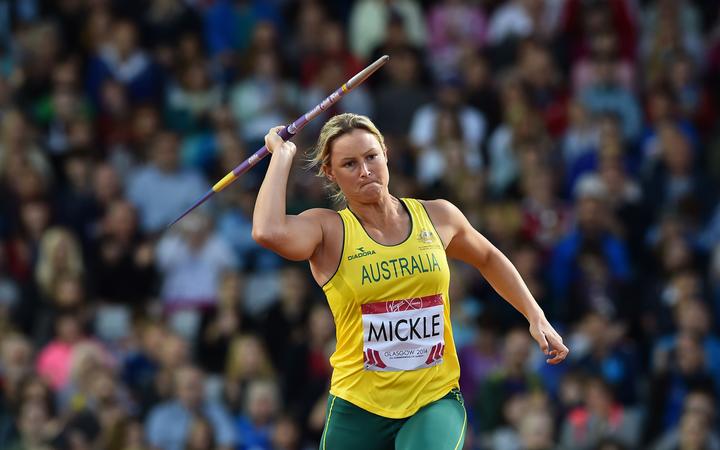 The former Olympic javelin thrower became the first female head coach of the Christchurch Bulldogs men's Australian Football League (AFL) team when she joined the side in serendipitous circumstances.

The Bulldogs won the Premiership in her first season in charge last year and began their CAFL title defence over the weekend with Mickle back and hoping for a second flag.

The successful history-making coaching appointment came at the prompting of a man Mickle has a few things in common with.

Stevenson knew Mickle's background and suggested she take on his team's vacant coaching position - although she had never coached a men's AFL side.

So proud of my boys!!! #premiers #afl #cafl #doggies #woof

"The boys were incredible to teach I thought it'd be interesting having a younger female, especially from Australia, telling a bunch of blokes what to do, but they did everything I said and we're relishing in it," Mickle says.

The Bulldogs did not win their opening game of 2020 on Saturday but Mickle says her under strength side will improve quickly through the season.

"I like to think the first game gives the others teams just a little bit of false confidence of where we are at.

"I've got no doubt for the rest of the season we're gonna be hitting our strengths that's for sure."

If the Bulldogs need some inspiration for overcoming adversity, they need to look no further than Mickle.

Growing up in Western Australia, Mickle played footy and threw cricket balls with her older brother who treated her "more as a mate than a sister".

"As a young kid I was pretty coordinated and loved all sports and really loved AFL footy but didn't get the opportunity because there were no female teams," Mickle says.

"So my brother went off to play footy and I had to go off and find myself another sport, which because I could throw a cricket ball with my brother very far I found this event called javelin where you get to throw something and you get to go to the Olympics for it if you're pretty good at it."

Mickle won a Commonwealth Games gold medal in javelin in 2014 and a silver medal in 2010, she went to two Olympic Games and took home a silver medal for the 2013 World Championships.

Her athletics career came to a halt in 2015 when she popped her shoulder doing an Olympic lift in the gym, which required surgery, but the timing was right for her to get involved in another growing sport.

Can’t believe it’s been 2 years since I played AFLW!!! Decided to have a kick in the park yesterday and I think I have broken my foot Man I’ve turned soft haha... time to toughen up!!!

Mickle signed for the Fremantle Football Club in the inaugural season of AFL Women's competition in 2017 after organisers saw an opportunity to promote the new competition through a talented athlete making the transition to the football code.

Mickle took her childhood dream of playing AFL seriously and ended her contract with Athletics Australia.

However, the switch did not end how she intended.

"It was certainly worth the risk of stopping my athletics career to start my AFL but unfortunately my very first game I did my ACL, so it was a bit of a sad ending to that story but still the whole transition was incredible."

While Mickle was recovering from surgery on her knee in Perth her partner got a job in Christchurch and Mickle decided to make the move across the Tasman.

Well the time has come to officially hang up the old smelly Javelin boots... What a career I have had!!! Sport seriously isn’t all about the medals you win or the records you break - it’s about the mates and memories you make along the way!!! Thanks to @asicsaustralia @toyota @mastersmilk @athletes_australia and @insidewais for all of your support but an even bigger thanks to all the amazing people that have been with me along this journey! I seriously wouldn’t be the athlete/person I am today with out my incredible family, friends, training partners, @gward61 and @coach_murph66! Thank you from the bottom of my heart!!! Onwards and upwards now - new challenges come at me #newbeginnings #newgoals #proud #thankyou

After a brief attempt at reviving her athletics career Mickle says she realised her body was no longer up to the rigors of elite competition and she retired.

Coaching across the codes

From a young age Mickle was coaching individual athletes and had aspirations of becoming a throws coach.

Her move to New Zealand in 2017 has seen that goal become a reality.

When she is not at the oval coaching footy, Mickle is part of Athletics New Zealand's coaching staff and has her own squad of throwers.

"From retiring from sport to then coaching it has been an incredible transition for me, I've almost got the same amount of passion for being an athlete as now what I do coaching," Mickle says.

"To transfer that over and turn it into a bit of a job is my ideal position."

As a 16-year-old one of Mickle's mentors told her the best way to learn about javelin was to teach it.

"A lot of people just think athletics is all about Olympic glory and things like that but as a coach and at schools just seeing those little, tiny improvements that just gives them a PB [personal best] is the greatest feeling, so that's what I strive for now."

Mickle is also part of Sport New Zealand's push to get more women into coaching.

She is one of 12 emerging women coaches who are paired up with experienced mentors as part of the recently announced Te Hāpaitanga development project to expand the female coaching talent pool.