The All Blacks could be forced to take several rookie first-five's to Australia for the Rugby Championship, with several of New Zealand's top players not keen to go. 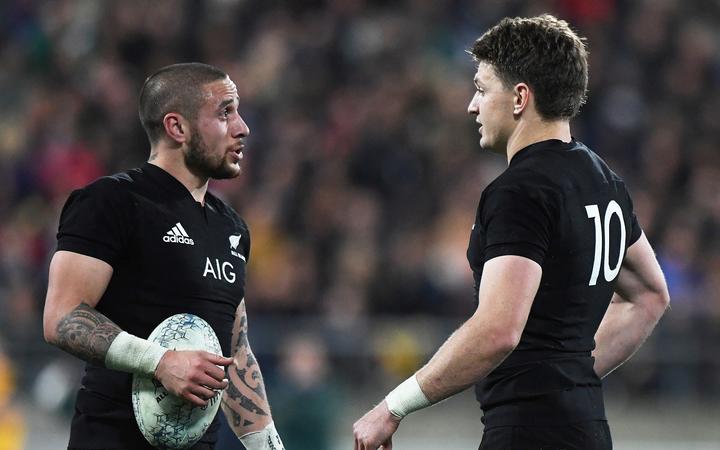 RNZ understands TJ Perenara and Beauden Barrett have told NZR they don't want to leave their families for up to 10 weeks. Photo: Photosport

RNZ understands a group of players have already told New Zealand Rugby they don't want to leave their young families for up to ten weeks, which would likely include spending Christmas in quarantine upon their return.

Those players include first-fives Richie Mo'unga and Beauden Barrett.

Mo'unga and his wife recently had their first child, while Barrett will become a father for the first time in the next month.

Halfback TJ Perenara, who has a newborn baby, wants to stay in New Zealand, which could leave the All Blacks coach Ian Foster with a big hole to fill in the playmakers role.

Winger Sevu Reece and his partner are also set to have their first child in the next month and several other players with young children are also reticent to head across the tasman, meaning it could be a vastly understrength All Blacks team that tackles the Rugby Championship.

Last week SANZAAR ruled Australia will host the Rugby Championship in November and December with New Zealand due to play Australia in two Bledisloe Cup tests before, in October.

SANZAAR made it clear the reason the tournament went to Australia was due to the quarantine protocols.

Chief executive Andy Marinos said in a statement: "SANZAAR ultimately determined that based on government-required quarantine protocols [for entry and training prior to the tournament] and commercial underwriting, the Rugby Australia submission was the most desirable and workable in terms of tournament logistics for the essential pre-tournament preparation period and the six-week tournament itself."

Australia will host the six-week, 12-match, "home and away" tournament involving Argentina, Australia, New Zealand and South Africa, in November and early December.

It will be played mostly in New South Wales with a round in Queensland.