Analysis - We almost lost the NBA. 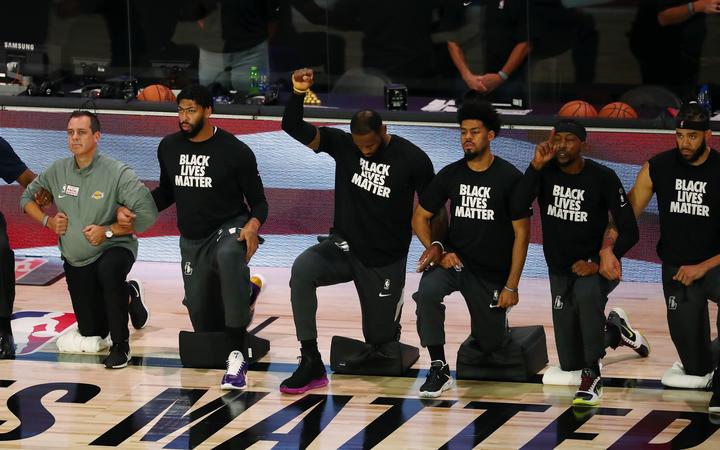 LeBron James of the Los Angeles Lakers and his teammates kneel during the national anthem before a NBA basketball game against the Indiana Pacers. Photo: AFP / Getty

"So what?" you say, and understandably.

But this is not just sport, it is American sport. These athletes, the gladiators of our modern Rome, have refused to clash for the Empire's entertainment. Classics majors and film geeks can tell you what that often foreshadows.

"A bit dramatic" you say, and that's my point!

Refusing to play is the kind of dramatic story that we expect to see in feel-good sports movies that teach us life lessons between suspenseful action scenes, or in the actual "story mode" of a computer game like NBA2K 2020.

It's a strong emotional arc for a fictional reality, not the real world. Part of how we know this isn't fiction is that the protest did not start with the vaunted LA Lakers, New York Knicks, Chicago Bulls, or even the Houston Rockets. It started with the Milwaukee Bucks, a team so unthreatening, their motto is "Fear the Deer".

The events of the last 24 hours have been extraordinary, though not unprecedented. The Finals MVP Trophy is named after legendary athlete and activist Bill Russell - a contemporary of Dr Martin Luther King and Mohammed Ali.

The NBA has had delayed starts due to contract disputes. It has had an early finish due to a pandemic. It has never stopped. Certainly not to protest in this way; not when Dr King was assassinated, not when Rodney King was beaten, not through all the recent, very public, killings of unarmed black American citizens.

But the police shooting of Jacob Blake, an unarmed man shot seven times in front of his children, followed by the killing of protestors by a 17-year-old old gunman who drove in from another state, galvanised the Milwaukee team to take a stand. Their opponents, the Orlando Magic, supported them by refusing to play or take a conceded win. As other NBA teams heard, they also refused to play. Soon after, all games were suspended. They were still suspended today.

The protest spread beyond the NBA. First to the WNBA, where all teams refused to play. Referees marched together in solidarity. Commentators walked off air in solidarity. Tennis superstar, Naomi Osaka, pulled out of her semi-final match in support. The other major US sporting codes cancelled games and trainings; Baseball, American Football, Ice Hockey… we live in such extraordinary times that somehow Ice Hockey being cancelled feels more informing of how racist the US has become than riots.

Because these actions didn't seem to carry anger as much as exasperation. As a fan, I didn't feel I was watching a political statement to a society. I felt I was seeing a group of grown men in pain, in genuine conflict about what their priorities should be as teams representing communities. There was a sense of "what else can we do?", when everything else that had been done had still seen such tragic events unfold this week.

We cannot continue to hold up sporting achievement as a triumph of the human spirit, while turning a blind eye to the destruction of the spirit of the communities those athletes come from.