It's Efi Fa'atau's third year coaching netball at Samuel Marsden Collegiate School in the Wellington suburb of Karori and it seems he's found his calling.

His 15-year-old daughter Eva attends the all-girls school and he's been coaching her since she was about 10.

Netball is by far the sport of choice for New Zealand girls and it seems more dads are putting their hands up to coach their daughter's teams, with good results.

Efi played indoor netball for New Zealand some years ago so he was familiar with the game.

His son plays basketball but netball was the obvious sport for Efi to coach.

"To be fair it sort of came naturally to me, I was probably more of a kid myself anyway so I probably enjoyed their company as well so I get on with the kids so it's been fun."

Efi, who coaches the school's Senior A team, said there had never been any problems coaching his daughter.

"I think we're just used to it now, we've been together coaching and playing together for a few years now so we've got a good understanding that I'm the coach when we're here and I'm dad straight after training and straight after the game."

Efi's daughter Eva Whitfield said it didn't take long to get used to her dad coaching her.

"It was a little bit weird [at first] because having dad at training but it was good because he's always been kind of coaching me since I was really small even when he wasn't like officially the coach of our team. I guess I've had dad for so long now that I'm just used to it," Eva said.

Efi said he was quite strategic and liked to analyse the game.

"I'm quite particular about the style I like to teach as well. I watch a lot of footage of the girls' games after the Saturday games. What I like to teach here is probably more life skills through sport through netball. You see the girls' confidence grow and that helps my own coaching confidence as well," Efi said.

The team achieved a big milestone last year by qualifying for their first ever New Zealand Secondary School Champs.

They had to make it into the top five college sides in the lower North Island and it was no coincidence they got there.

Efi said he was very deliberate about building a team culture.

"I think that was very important for us right from the start and for the girls to buy in to what we had planned for the future here at Marsden. We set up a five-year plan that we wanted to implement and we started that a couple of years ago so to make nationals last year was a huge milestone for Marsden for sure."

Efi wants to keep building depth at the college so likes to include junior players in some of the seniors' training sessions.

He also likes to make sure his players are prepared for the rigours of netball.

"I am tough on fitness I believe that you probably play your best netball when you are fit and strong enough. So we probably don't touch a netball for probably the first month of training. They keep coming back so credit to the girls for putting in the work and I think when they start seeing their results I think it's easy for them to come back for more."

Sarah, who's 14, said Efi kept them on their toes.

"It's a lot of different plays, like different sort of tactics that he includes in the game which is new that we've never done before ... strategy. I quite like Efi as a coach because he just gets to the point and he doesn't mess around," Sarah said.

Keila Guiney is Sarah's mum and said Efi has been instrumental in her daughter's progress.

"Throughout Sarah's primary schooling and since she's been at Marsden he really has been probably one of the few avenues that we've had in this area in the Western suburbs to actually get additional coaching outside of what you would just get from parent coaches at school," Keila said. 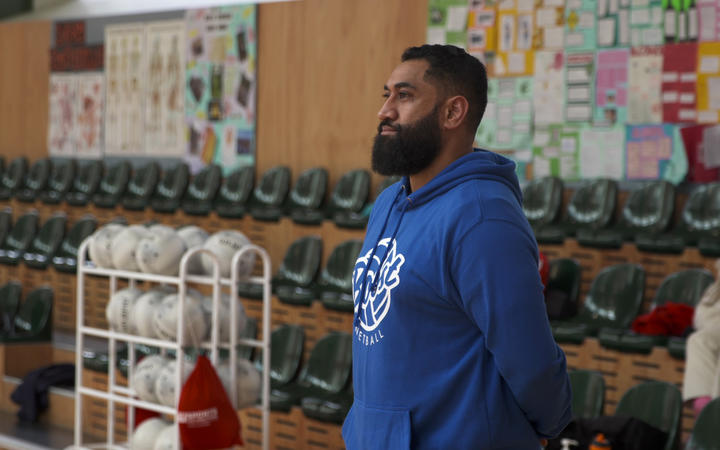 Outside of his day job, Efi also runs a programme called Boost Netball, teaching netball fitness, which is open to all age groups and abilities.

It's not unusual for him to have between 80 and 100 girls in the school gym on the weekends.

Keila said Efi had almost single-handedly enhanced the reputation of netball at Marsden.

"We came here because of Efi, I don't know about anybody else but he certainly is a force, the main person behind netball here and because he's here we came here."

Efi said he would encourage other dads to give netball coaching a go.

"Any parent … but I have encouraged a few dads to get on board. I don't know what it is about the dads but the netball girls respond to us I'm not sure why, but I would definitely encourage more dads to get out there."

Giving it a crack

Down the road at Karori Normal, Pete McKinney coaches both of his daughters' netball teams.

He started four years ago, when his eldest daughter Abigail started playing and still coaches the now 11 year old.

"I started as a parent helper, then next couple of years I started more coaching." 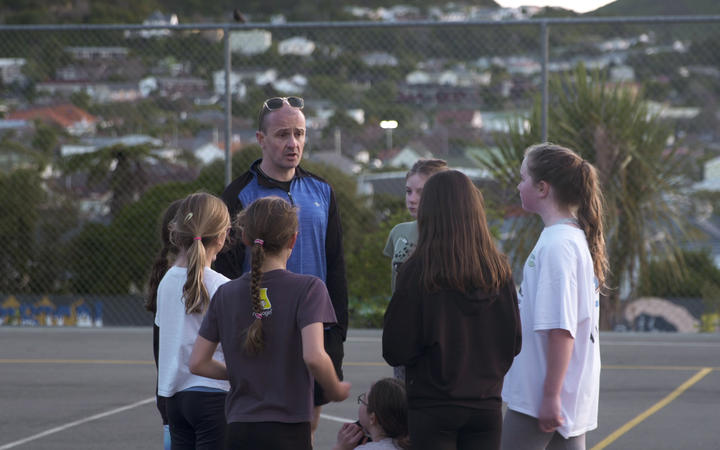 Did he know anything about netball?

Netball isn't a big sport in Scotland, where he hails from.

"I was actually a rower so I did rowing with my dad. Netball's actually on the other side of the family, no netball on ours but rowing for me."

Pete said there are lots of resources out there for first time coaches.

"You can go for classes, there is a Future Ferns programme which you get booklets for which gives you essentially routines to give the kids, weekly programmes, there's a lot of resources, a lot of support available as well. And it's a really easy sport, you don't need a lot of equipment."

He said he had a new-found appreciation for the game.

"My mother in law was actually a netballer for Scotland back in the day but I still didn't know much about it. But yeah you see the skill and the almost brutality you get when the Silver Ferns are playing."

Pete said he had got to know more people at the school, and in the community as a result of coaching.

Is there a lot of netball talk in the McKinney home?

"Yes, we do and their aunts and their gran obviously played netball as well and their cousins play netball back in Scotland so there's a lot of netball chat in our house."

Stacey Wilson said she was grateful Pete had coached her daughter Nena for the past three years.

"He's lovely, the girls love him, he's got a great way about him, just makes everything fun, not too strict, not too stern, they have a lot of fun," Stacey said.

Like Pete, Katie also happens to be from Scotland, and said she knew nothing about netball until her daughter started playing about three years ago.

"We never actually got to play netball it was never a sport choice for us, it was either hockey or tennis. So for Millie it was like a whole new thing for the family really," Katie said.

"It was really nice to watch her play and I feel like I've actually missed out because it's such a fun sport to watch and it's great because we get some boys play as well and obviously awesome having a male coach." 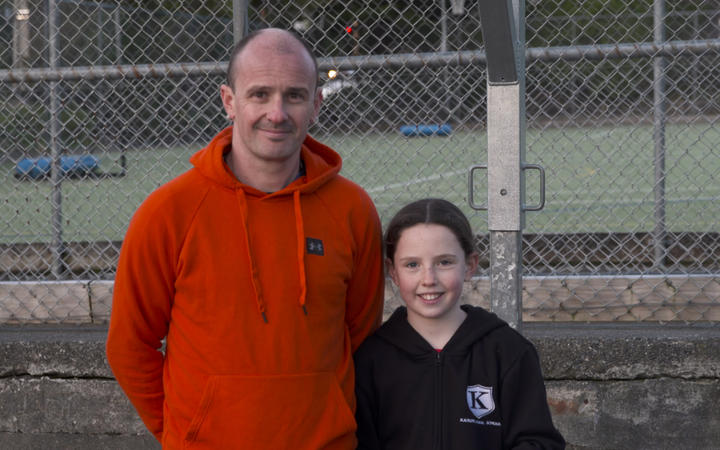 Pete McKinney and his 11-year-old daughter Abigail. He also coaches his other daughter Juliet and her Year 4 netball team. Photo: RNZ / Samuel Rillstone